IKEA reveals we’re all in it together

Despite British homes getting smaller, home furnishing experts IKEA reveal that we’re happier than ever to live together under one roof. 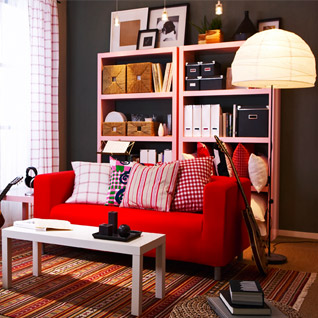 • 517,000 UK homes have grandparents, parents and children all living under the same roof – a 7% increase over the past five years

• 3 million ‘Boomerang Children’ are now living back with their parents

Despite newly built UK homes having some of the smallest floor spaces in Europe, Brits are continuing to welcome family members back to the nest like never before. Despite 62% of multi-generational dwellers admitting they were forced into it by circumstances, 77% say that they are happy with the situation and even more, a further 83% of people, feel it has brought their family closer together.

To celebrate its first 25 years in the UK, IKEA has commissioned a report to chart the developments and trends in British lifestyle. The report has revealed that more than half a million households in Britain contain three or more generations and with house prices soaring and a ‘linger longer’ generation at the top of the family tree, it is estimated that by the end of 2012, one in ten parents will have their grown-up children living with them.

The study, compiling data from the last 25 years of British living, highlights that family life has seen a turnaround in recent years. Research shows the steady move away from the nuclear family towards a more wide-ranging raft of household set-ups and the return to the nest of 1.8 million men and 1.1 million women aged 20-34 who have moved back to the family home, meaning that space in our homes is at an all time premium.

The multi purpose living room
Despite 77% of people having six or more rooms in their home, seven in ten people (70%) still prefer to hang out in the living room socialising and entertaining.

72% of people now consider the living room to be the beating heart of their homes. It comes top as the place where most activities in the home occur, with people spending most of their time in the lounge where email checking, bill paying, using Facebook and socialising all takes place, side by side, with a fifth (20%) of people even using the living room as a hub for fitness and exercise.

The living room has also become an extension of the workplace, taking the role of the home office. Interestingly, despite 32% of Brits having a home office or study in their home, almost one fifth (19%) of Brits choose to work in the living room. Even easy access to technology has not changed this as 48% of us use our PCs, laptops, and iPads in the lounge rather than the study.

The TV dinner is also still alive and well with nearly half (49%) 0f Brits admitting to eating most of their meals with their family in the living room as opposed to only 24% of people who eat in the dining room and just 21% who dine in the kitchen. This trend looks set to continue as we head into the future, with over a third (36%) of people stating they think we’ll be eating meals in the living room in 25 years too.

Gemma Arranz, Country Interior Design Manager at IKEA UK & Ireland said: “Since IKEA landed in the UK 25 years ago, we have been striving to develop a range of products that present ideas and solutions that are relevant for people’s everyday lives.

With more and more multi-generational families living together, we need to think more about making our living space work for us, using practical home furnishings and accessories for small but smart changes, which are inspired and yet still affordable.”