How to Eat Oysters the Michelin Star Way

Steve Smith, head chef at Jersey’s Bohemia restaurant, reveals how to eat oysters the Michelin star way—step out of your comfort zone and check out his adventurous tips. 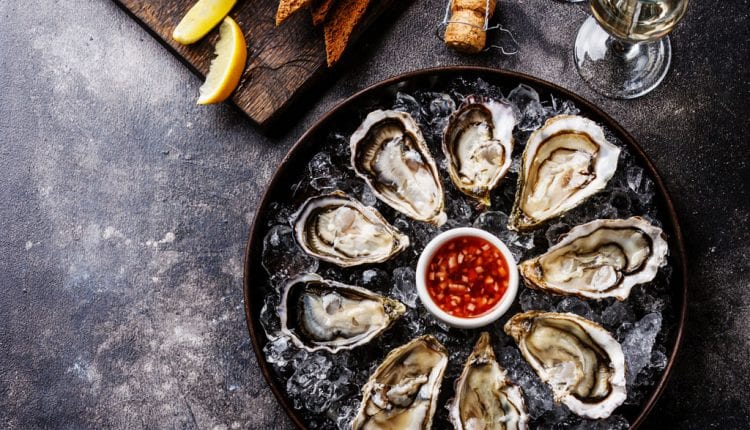 Oysters are a particular food item that has people divided—many will err on the side of caution when confronted with them. Although they may not be much to look at, they are actually packed with a huge amount of flavour. Oysters also have a surprisingly high nutritional value—being rich in protein and iron. Nowadays, these molluscs are classed as a luxury ingredient, however, this wasn’t always the case. Centuries ago, oysters grew plentifully on the UK’s shores and were scooped up by locals for sustenance. Their commonality among the lower classes contributed to their reputation as a ‘lesser’ food. But as the supply of oysters slowly dwindled, they became a rare delicacy enjoyed by more affluent types.

Today, this treat is both revered and feared by the general public. What is it exactly that steers people away from sampling these shellfish?

One element that usually alarms people is the common question: how to eat oysters? To chew or not to chew? While word on the grapevine states that chewing oysters is a no go, The Guardian says otherwise—‘[…] like any meat, [oysters] should be chewed’. This apparently releases the fullest amount of flavour for an unbeatable taste experience. Oysters can still be swallowed whole, of course—it is purely down to preference.

Other people are put off by the fact that they are technically ‘live’ when you eat them. During preparation, the shells of oysters should be tightly closed or snapped shut when lightly tapped. Shells that are left open are not live and therefore cannot be eaten safely. Dead oysters are notorious harbourers of bacteria that can cause illness if ingested; this is why they are usually consumed or cooked when live. Oysters are traditionally served with mignonette, which is a condiment made up of delicately diced shallots, vinegar and cracked black pepper.

Jersey’s Michelin-starred restaurant, Bohemia, is renowned for its seasonal tasting menu that offers fresh produce and delectable taste combinations. A regular component on the Bohemia tasting menu is fresh oysters, served up in the most creative ways. Bohemia’s head chef, Steve Smith, shares his top tips on how to eat oysters—for the more adventurous gourmands.

A tipple of tequila

If you are less eager to eat your oysters raw, then opt for Smith’s deep-fried version. He proposes covering your oysters in plain flour, beaten egg and breadcrumbs. Once they are evenly coated, pop them in a pan of searing hot oil and deep-fry for one to two minutes or until they are crispy and golden.

Another fantastic way to eat oysters is with a touch of parmesan. Many are hesitant to combine seafood and cheese, but Smith is certain that this sumptuous option will delight your taste buds. Start by sprinkling parmesan over your oysters. Then drizzle with melted butter and season with cracked black pepper. Finish by grilling oysters for one minute.

A touch of class

Smith puts a twist on the classic combination of oysters and Champagne with his fizz-topped mignonette. He advises mixing together Champagne vinegar, finely chopped shallots and cucumber along with salt and pepper. Allow the mixture to chill briefly in the fridge. Finally, add a dash of Champagne to the mignonette just before serving on your oysters.

If you have enjoyed are article on how to eat oysters the Michelin-star way, click here to read more on Celebrity Angels about how to make an easy beef wellington.

A History of Chocolate