Householders prude not rude in the bathroom

It seems the British reserve is alive and splashing, because while us Brits have an appetite for being entertained in the bathroom, it’s not by our partners. 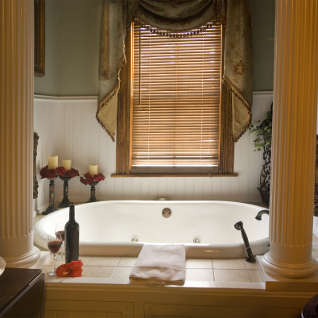 In a recent survey of 1,700 homeowners, a prudish 29 per cent of respondents confessed they would never use the bathroom if anyone else was in the room, not even their significant other.

And surprisingly, 94 per cent of people said that they never brush their teeth with their spouse whilst a huge 95 per cent of couples say they would rather shower alone.

However, while a third of the UK prefers to be in the bathroom on their own, some respondents in the poll by luxury bathroom firm, Utopia, have admitted they would make room for indulgences such as a beer keg, a wine glass holder and a surround sound system.  Others confessed that they would open the bathroom door to other people including a personal masseuse – to help them relax, a cleaner – for obvious, practical reasons, and a host of sexy celebrities including Kim Basinger, Nigella Lawson and Colin Firth.*

When Utopia researchers asked what one thing people would like to have in their dream bathroom, entertainment topped the list, with surround sound (20 per cent) and Sky TV (15 per cent) being the most popular choices.  A thirsty four per cent said a wine/beer cooler would be part of their dream bathroom while a vocal few** opted for a karaoke machine.

Speaking about the findings, Utopia’s sales and marketing director, Mark Bailey, says: “We Brits seem to be a little more prudish than we usually let on.  Isn’t it strange that most of us will share a bed with our partner but not a bathroom?

“What came over very strongly in our survey is that ideally, people would like entertainment in the bathroom, whether that is music, film or TV.  It is a trend we are responding to and are already in talks with some big consumer brands, discussing some innovative link ups to see if we can make these dreams a reality.”