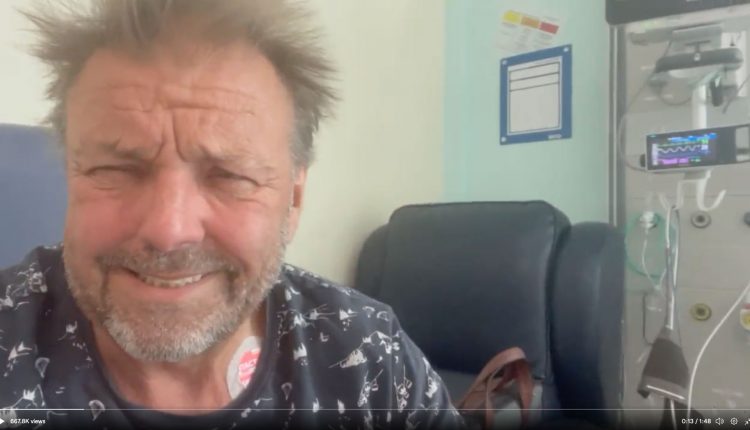 Martin Roberts, star of the BBC’s Homes Under the Hammer and celebrity guest editor of Celebrity Angels magazine Property & Home, has revealed that he faces an extended stay in hospital as the causes of his heart complaint are investigated. Martin told newspapers that he expects to be in hospital for at least another two weeks after having an operation to drain fluid from around his heart which had left him ‘just hours from death’

The 58-year-old’s emergency surgery took place after he was admitted to hospital with chest pains, and doctors found a “massive amount of fluid” around his heart.

Martin revealed that the condition may have begun with “a serious lung infection”, and he has now been transferred to the respiratory department at the Royal United Hospital in Bath.

Martin posted videos to his social media followers after his life-saving surgery, saying: “I ended up in hospital in Bath yesterday, I had a few chest pains and just feeling generally lousy, so I was brought in here and turns out I had a massive amount of fluid all around my heart, which was actually stopping my heart working.”

“Had they not got rid of it, which they did in an emergency operation last night, then it’s sort of quite serious, like, hours to live kind of c**p.

“So here I am, still around, thank goodness, thank god and angels, all those things.”

In a later video post he said he was “scared and emotionally battered” by the ordeal, adding “I have been overwhelmed by all the messages of love and support I’ve received. They mean the world to me and help lift my spirits, at a time I feel a bit scared and very emotionally battered, like you wouldn’t believe. Thank you. Thank you.” He went to to say that he feels he is recovering, adding: “The heart problem seems to have stabilised. They are now running tests to find out what caused the problem in the first place. Seems this fluid build-up around the heart that nearly killed me was an effect (a deadly one) rather than a cause.”

Martin’s health scare follows his mercy mission to Ukraine in which he personally delivered a van full of much-needed supplies to a camp for displaced people on the border with Poland.

Ed Sheeran and Snow Patrol Among Star-Studded Line-up for…

Celebrity Angels’ Martin Roberts on His Mercy Dash to…

We at Celebrity Angels send Martin all our best wishes for a speedy recovery.