A light-hearted look at a serious subject may be permissible in this case, especially as Brendan Connolly shares some sound advice in his personal overview of home security. 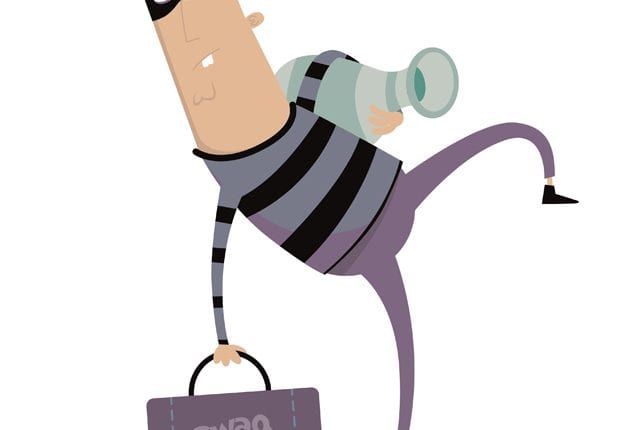 High summer and early autumn are times of the year when burglaries reach their peak, according to the stats. Obviously this is because it’s the time when many of us choose to take a much-needed holiday – and Mr Burglar knows it.

There are various actions we can take to frustrate the burglar – Neighbourhood Watch, for example, has been deemed by the police to be a successful deterrent. However, as Dominic Littlewood has often reminded us in his TV show Beat The Burglar, a dedicated burglar on a mission is going to be a hard man (or woman) to keep out. But of course keeping the burglar out in the first place is what we must plan to do, especially if we’re feeling vulnerable, and especially if we’re planning to be away for two or three weeks.

Too Obvious
Some of the prime deterrents are almost too obvious to state but, surprisingly enough, they are high on the list of “Did you remember to…?” “No! I forgot,” I thought, as I drove onto the Cross Channel Ferry bound for Roscoff, I forgot to cancel the milk, and I forgot to cancel the newspapers! It would be a dead giveaway. Should I return? I took a risk and carried on.
“So, that’s lesson No.1 you failed on, son,” – I can almost hear the brilliant Mr Littlewood breathing into my ear. He’s brilliant because he knows every trick of the burglar’s trade and his advice is always sound.

Locks. Now those I did remember (which makes it all the more ironic that I bombed out on Lesson No.1, the obvious one). Weeks before my departure, I had called in men in boiler suits who carried bags of strangely shaped tools. These were the experts, the locksmiths, who would tell me if my house was as safe as Fort Knox, or a walk-in theme park on the map for all burglars within a radius of fifty miles. The almost immediate short intakes of breath from the experts told me my home was in the latter category. “You see here, sir,” said one, with the voice of a thousand years’ experience of dealing with idiots, “there is nothing substantial here to prevent our friend from entering the said premise, i.e., your house.” He was wriggling the rusty single window latch in the downstairs loo. OK, so window locks were then called for and installed, two for every window throughout the house: “Quite surprising you’ve never been done, Mr Connolly,” – one of the experts confided.

But what surprised him further was when I told him that I had already researched the subject of ‘House Security v. Mr Burglar’, and that this was the very reason I had called in this local firm of security experts. “Very wise, sir, very wise,” he said encouragingly, “planning a little trip away are we?”

I have a friend in the north of the country whose allotment shed had been raided several times, although there was nothing worth stealing. After the third occasion he put a sign up that stated: “Burglars will be composted.” It seems to have worked, as he hasn’t been burgled since. But I digress…

Read more on how to improve your home on a budget.

I had wanted my house to be “as safe as houses” during the time I was away which is why I decided to research the topic. First off, I learnt that the good old Met was saying, “Burglary is a serious issue, that’s why we are targeting burglars in London.”

The first part I knew, and the second part was reassuring in a way, except that my house isn’t in London. Wouldn’t burglars simply read this and text one another “LONDON IS OFF MATE” and drift off to other non-targeted areas? Yes, they would! And this is another reason why I decided to take the action I have described above.
Returning to my large research portfolio, Part I, Section IV, I see I have copied the following invaluable police advice:

Innovative Work
My friends think I’m a bit cranky because I’m fascinated by locks, and I very much admire the locksmith’s innovative work. I have on several occasions visited the Victoria & Albert Museum in London, specifically to look at the marvellous display they have there of ancient locks. Some of these, and their keys, of course, are extremely beautiful and one has to admire the ingenuity of some of these seventeenth and eighteenth century locks. I suppose our modern burglar would simply laugh if challenged to pick one of these fine, polished steel locks, and could probably do it blindfolded with one hand in five seconds. Our modern locks are therefore very sophisticated by comparison and I particularly admire the 5 lever mortice deadlock (which I now have fitted to my front door). These locks are so cleverly made that our burglar becomes frustrated and may simply try to batter the door down in rage – which is not an elegant solution to the problem of gaining unauthorised entry. So, of the following tips the Met gives us, I got the first one right:

Smugly, I have been able to tick off most of these, but I did have to return to my research portfolio to check the difference between a London bar and a Birmingham bar. Here is the answer: a London bar is a metal strip on the frame side to support the strike box of the lock; whereas, a Birmingham bar supports the frame on the hinge side.

Last Word
I’m happy to report that when I did return to my house after two weeks, the intelligent milkman had twigged the situation, and there were only three cartons of curdled milk rather than eighteen; however, there were a lot of newspapers that made the front door hard to open, even with a key to my 5 lever mortice deadlock. So, take my advice, call in a security firm before your next holiday if you haven’t already done so!

Read more on how to add value to your home.

The Working Mother: How easy is the transition from working girl to successful working mother?