Rethink Your Kitchen Lighting – It’s the End for Halogen Bulbs 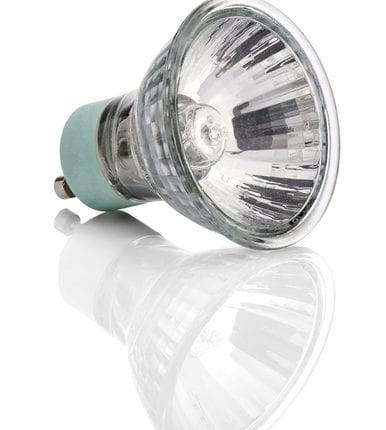 We all knew it would happen eventually, but now sales of halogen lightbulbs are to be banned in the UK from September. Even more shockingly, fluorescent lights are to follow, all part of government climate change plans.

If you’ve ever watched your electricity smart meter go out of its mind when you switch on our kitchen ceiling lights, you’ll know why the days of these neat little lamps are numbered. Like old-fashioned fluorescent bulbs, halogens create as much heat as they do light, and are incredible wasteful of power. It’s been estimated that getting rid of them will cut 1.26 million tonnes of carbon emissions a year while delivering energy savings to consumers.

See also: Is Artificial Grass Right For My Garden?

But will this leave us stumbling around in the dark? If you remember the early days of low-energy bulbs, which took ages to switch on then gave out insufficient light to see your own feet, you may suspect so. But of course technology has moved on a lot since then, and the latest generation of LED bulbs are not only energy-saving, lighting without creating heat, they’re also affordable.

Under EU regulations, the UK began phasing out sale of higher-energy halogen lightbulbs in 2018 under EU-wide rules. By September, retailers will not be allowed to use most remaining halogen bulbs, which are particularly popular as in-ceiling lights, particularly as spotlights in kitchens.

The legislation is being brought forward this month by the government, and is expected to be in force by September. Of course, it won’t mean that you have to tear the halogen bulbs out of your ceiling, but you may find it impossible to replace them when they die.

Low-energy LED lightbulbs now account for around two-thirds of lights sold in Britain and by 203 that figure is expected to have gone up to 85 percent. LED bulbs last up to five times longer than traditional halogen bulbs and can produce the same amount of light, but use up to 80 percent less power. (And they’re no longer expensive – you may even have noticed them appearing in pound shops).

Smart and Snazzy Lighting Trends for 2022

What Happens When Architects Design Furniture?

It won’t be entirely straightforward to replace your halogen bulb fittings with LEDs, as many recessed ‘downlighters’ have a hidden transformer which steps down 240V main power to the 12V used by the bulbs.

The new legislation will also include moves to phase out high-energy fluorescent lightbulbs, such as the strip lights commonly found in offices, with a view to bringing an end to their sale from September 2023. In this case, LED bulbs could be incorporated into the existing fittings as a more energy-efficient alternative.

The end of the halogen and fluorescent bulb is unlikely to cause as much fuss as the banning of the old incandescent filament bulbs, when one newspaper even resorted to giving them away in an attempt to encourage their continued use. At that time, the low-energy alternatives were hopeless (you couldn’t, for instance, use them in a circuit with a dimmer, and the quoted power outputs were plainly over optimistic).

But we’re all now getting used to LED bulbs, even if it is sometimes difficult to tell what you can expect from an ‘806 lumen daylight 100W equivalent’ LED bulb.

Along with the electrification of cars and the replacement of gas boilers, the move towards low-energy lighting is part of a plan to cut carbon emissions in the long term. Other measures will include the right to get goods repaired rather than replaced, and higher energy efficiency standards for white good such as cookers and fridges. The cut in carbon emissions as a result of the new rules on lighting is expected to be the equivalent of removing half a million cars from the country’s roads, according to the Department for Business, Energy and Industrial strategy.

Energy minister Anne-Marie Trevelyan said: “We’re phasing out old inefficient halogen bulbs for good, so we can move more quickly to longer-lasting LED bulbs, meaning less waste and a brighter and cleaner future for the UK.

Stephen Rouatt, chief executive of Signify UK, which owns Philips lighting, said: “Using energy-efficient LED equivalents for halogen and fluorescent lighting on an even broader scale will significantly help the UK on its journey to decarbonisation, as well as lowering the annual electricity bills for consumers.”

For the higher wattage form of halogen bulbs, consumers should be able to perform a straight switch to LEDs (once manufacturers come up with the correct form factor). For the lower wattage fittings, which use transformers, you may find yourself having to pay an electrician to remove the old transformers and install suitable fittings for LED.

Are We Closer to a Treatment for Alzheimer’s?