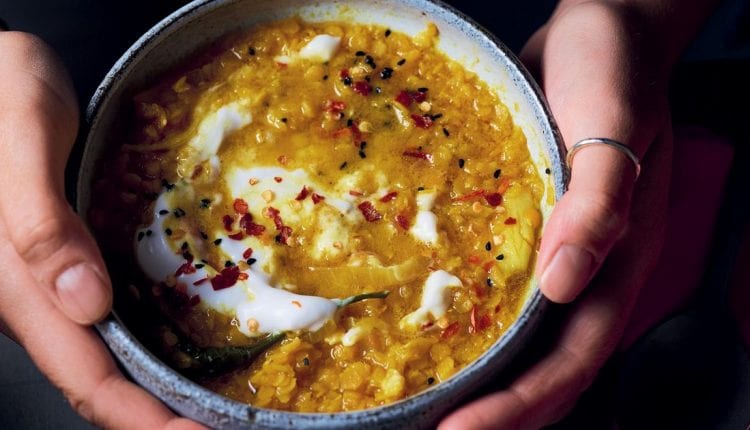 Grace Regan is owner of popular vegan curry house, SpiceBox. Inspired by her South Indian great-aunt Dolly, her biggest food influence, Grace launched a takeaway-turned-popular-street-food-stall, selling plant-powered curries. It was such a hit, in fact, she gave up her gazebo and set up a bricks and mortar SpiceBox restaurant in East London. Grace is also a talented food writer, longlisted for the BBC Food Rising Star Award and published in The Guardian and Huffington Post.

From the book SpiceBox: 100 Curry House Favourites Made Vegan by Grace Regan, a collection of curry house-inspired recipes for vegans packed with flavoursome, plant-based twists on popular classics, including curries, dhals, biryanis, and street snacks, comes this perfect recipe for those evenings when you’re too tired to cook. This flavoursome vegan dhal can be ready in just fifteen minutes.

Grace Regan says: “This is a dish I turn to again and again – often when I’m too tired or busy to cook but want something filling, nutritious and super-tasty. If you’re new to Indian cooking, or making dhals, then this recipe is a great place to start.”