Glaucoma is a progressive eye disease that damages the optic nerve and can cause vision impairment, leading in severe cases to permanent and complete blindness. It is an asymptomatic disease, which means it occurs without any symptoms appearing in the early stages. Without regular eye tests, glaucoma can often go undiagnosed and worsen over time. 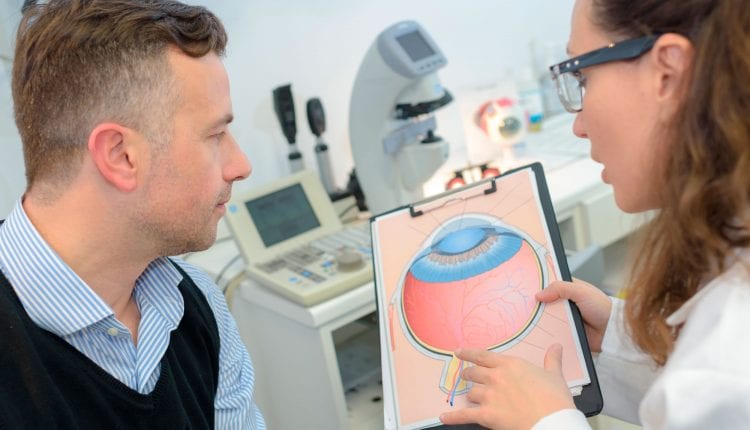 A major risk factor for developing glaucoma is increased eye pressure that occurs when fluid in the eye—which is used to transport important nutrients to the lens and cornea—cannot drain away through the natural drainage channels.

Glaucoma is believed to be hereditary and may not appear until later in life. It can occur at any age, but is more likely in those over the age of 40 and the likelihood increases with age. Additional risk factors can include race, with African-Caribbean patients more likely to develop glaucoma at a younger age. Severe myopia or short sightedness, poor blood circulation and inflammatory eye disease can also increase the chances of developing glaucoma.

With glaucoma, there are often no obvious symptoms until significant damage has been done to the eye.It can develop over many years and initially affects the edges of the vision. The first sign is often loss of peripheral or side vision which often remains asymptomatic. Both eyes are usually affected, although it may be worse in one eye.

A regular eye test is the best way to check for glaucoma. Free annual eye tests are available on the NHS for those over 60, or over 40 who have a family history of glaucoma. Eye care professionals recommend that everyone over 40 should have an eye check every two years.

During a standard eye test, an optometrist will carry out a series of examinations that check for the signs of glaucoma:

Although glaucoma is not curable, early intervention could delay or stop the progression of the disease. Treatment is focused on lowering eye pressure and typically begins with eye drops. However, eye drops can cause uncomfortable reactions in some people like redness, soreness and dryness. This is where new treatments such as Trabecular Bypass surgery may be able to help.

Trabecular Bypass surgery devices, like the iStent inject® are stents which are inserted into the eye’s drainage channels, and are designed to restore the eye’s natural ability to drain fluid in the eye, thus reducing the pressure in the eye[1]. The procedure is performed by ophthalmologists under local anaesthetic and the devices can be implanted at the same time as cataract surgery, or during a separate surgery.

The iStent inject® is a Trabecular Bypass surgery device.Made of titanium, it is the smallest medical device known to be implanted in the human body[2], measuring just 0.36mm in length. More than 400,000 iStent inject® and iStent® implants have been implanted around the world to date[3].

Studies suggest that the iStent inject® procedure is safe and effective[4].An international study has shown 72% of patients who were treated with iStent inject® no longer need to take glaucoma medication after 12 months.[5]

Glaukos and iStent inject are registered trademarks of Glaukos Corporation.

Be Clear on Myopia