Many celebrities are great examples of the benefits of fitness and healthy living. Their diets and exercise routines may even inspire you to start your own personal wellness regime. 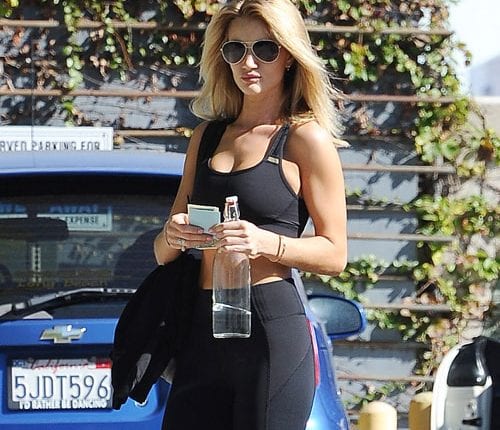 Celebrities have to look good and so they’re known for looking flawless—we see them parading their perfect bodies on the beach, or looking at us from a magazine cover with perfect, shiny hair and glowing skin. Although they receive help from clever lighting, many of them maintain strict fitness regimes.

Some A-list celebrities have a tendency to support the latest diet fads, but many adopt a health-focused lifestyle, acknowledging the importance of eating healthy and taking care of your body through exercise. Although we might not have access to their personal trainers, nutritionists and personal chefs, these 10 celebrities set an example we can all follow.

Best-known as a TV presenter, Davina McCall has also made a name for herself in the fitness industry. She has published a number of healthy eating books, Davina’s Smart Carbs and Davina’s 5 Weeks to Sugar Free, released a number of best-selling fitness DVDs and fronts an active-wear clothing campaign for Tesco. The busy mum has revealed she fits in 10-minute workouts during the day to keep herself in shape.

UK singer Ellie Goulding recently became a brand ambassador for Nike thanks to her love of exercise, and she is certainly a walking (or running) advert for the healthy lifestyle she preaches. She swears by intense, but relatively short, workout sessions every day, and compliments her active lifestyle with a vegan diet.

See also: Why Eating Healthy Breakfasts Might be even more Important than you Think

Melanie Chrisholm didn’t land the nickname ‘Sporty Spice’ without good reason. This year, the former Spice Girls star is backing Vertical Rush, the UK’s toughest stair-running challenge. Her top tip is to ‘try setting yourself a daily squat target and increase by a few each day and you’ll fly up those flights in no time.’

Like many actors before him, Tom Hardy has had to go through tough gym sessions to prepare for movie roles. In his breakthrough film, The Warrior, Hardy’s personal trainer had him doing four 20-minute workouts a day with light weights, a technique called ‘Signalling’.

Thanks to Tatum’s background in dance, the Hollywood actor manages to stay physically ripped. His favourite form of exercise is CrossFit, which is built upon high-intensity interval training. Tatum, who has a personal nutritionist, is also known to give fitness tips during interviews.

Queen of the I’m A Celebrity Jungle, Vicky Pattinson lost an impressive 43lbs, culminating in a popular fitness DVD. She has since designed and developed her very own nutritional protein and supplement range, Mini V. and says ‘exercise is very important, but the hardest thing is being able to maintain it and also have a balanced diet’.

The long-legged model prefers ‘fun activities’ to sweating out in a gym. She is a big fan of pilates, high-powered dance classes and skipping. Rosie also swears by probiotics and adds them to healthy smoothies.

Coldplay’s lead singer’s daily routine includes running and an hour of yoga—in addition to regular boxing sessions in order to build upper-body strength. In addition to being a vegetarian, Chris Martin has also eliminated alcohol and coffee from his diet.

Pop icon Madonna has defied her age and still looks as trim and toned as she did decades ago. She takes exercise seriously: gym sessions six times a week, workouts lasting three to four hours a day. Madonna has long been following a macrobiotic diet, based on a Japanese eating style.

In just four weeks, the Australian movie star Hugh Jackman managed to boost his physique and go from a lead role in Les Misérables to a wolf man mutant in The Wolverine. According to Jackman’s personal trainer, his training routine is about lifting weights based on a percentage system, which increases every week. Yes, it is hard work—but that’s what it takes to become an action hero.

Why Buy New? Save Money with Simple Repairs!