Thirteen years on from the day they got together and Blue are on top form with their fourth album ‘Roulette’ due for release this month. Our editor Caroline Kent caught up with the boys from the re-formed ‘man-band’ at Juju on London’s celeb-studded Kings Road. 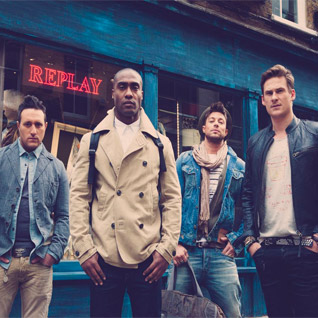 Caroline: What did you guys get up to on your break from the band?

Simon: I went straight into a solo career and then when my music label suddenly went under I did Sister Act with Whoopi Goldberg. It was an amazing experience but Blue was always in the back of my mind, I was just waiting, hoping for that phone call saying “Are we ready to get back together?”

Duncan: I was quite vocal about leaving the music industry, my heart wasn’t in it and after Blue split up, I wanted to get away from that world. I did Dancing on Ice and through that, got the part of Billy Flynn in Chicago. But I just missed the Blue boys; I felt very awkward being on my own.

Antony: For a year I performed eight shows a week to pepped up audiences at Blood Brothers. It was nice to always get a standing ovation!

Lee: I did a film called The Heavy with Vinnie Jones and Stephen Rea (Crying Game and V for Vendetta), there’s a great scene where Vinnie chops my fingers off. Working on solo projects isn’t as fun because you feel really alone a lot of time, especially when you look around on stage. I realised the people I was working with didn’t understand what I wanted to do, our vision is stronger as a group than alone.

Caroline: So you’re quite collaborative as a band?

Lee: The other day Duncan and I were in a bar and there was a piano and we just jumped on and started playing these chords.

Duncan: I quickly filmed him doing the chords and they were screaming “Get off!” because there was a show going on. But we were shouting back, “Hang on a minute. We can’t forget them!”

Lee: She was like “You’re not allowed on there,” and I was all “Shut up, this could be a number one!”

Caroline: If there’s genius happening in front of you, you don’t stop it.

Duncan: Sometimes these moments just happen and you’ve got to go along with it.

Caroline: Like right now, being the right moment for you to come back together. Was it that you just missed each other or that everything had to be in place, in terms of where you were in the industry and how you could behave as artists?

Duncan: I think it was all about soul searching.

Simon: When you grow up in this industry you are being babied all the time: you got car picking you up, a chauffeur taking you somewhere, your hair and make-up is done for you. Even though Duncan and myself were 21 at that time, we were still young boys mentally.

Caroline: What effect did that have on you? Did being spoiled make it easier for people to manipulate you?

Simon: When everything just came to you, you couldn’t say “Stop, I want control some of this myself.”

Lee: There are geniuses who set up businesses, especially online stuff, when they are 16. They have their shit together and they understand the ins and outs of what they do. It wasn’t an age thing for us, it’s just we weren’t shown or told. I left school and I didn’t know anything about business, all I knew was from watching my mum graft really hard while I was growing up. I didn’t understand the mechanics of the industry and how it worked. And at 21 we should have known that…

Simon:  But if you are not taught, how should you know?

Caroline: Especially as creative people, who are not necessarily technically minded…

Lee: Exactly. Tell the entrepreneurs to go on a stage and sing in front of a million people! Our manager should have made his priority to sit us down and tell us the way the business works. But there’s a reason he didn’t do that, and there’s a reason why we didn’t make as much money personally as we could have, I’m leaving it at that.

Simon: They keep the artist blinkered by the razzle-dazzle of the industry and it keeps their mind of the actual mechanics of it. It’s about control.

Caroline: So you’re not sure that they had your best interests at heart?

Lee: Exactly. With the exception of Antony, we didn’t really have prominent father figures in our lives. And my mum, bless her, she doesn’t really understand money or business. I never had a father to sit down and say “Right son, let me talk to you so understand things like that.” All of a sudden, you’ve got money and you’re 21 and wondering: how should you invest it, what do you do with it? But this time round we took ourselves to business school, we set up our own company, we own everything 100%.
Caroline: How has music industry is changed since you’ve been away?

Caroline: The world you’re working in has evolved, but what about your fans?

Lee: We were on This Morning earlier, and there were fans outside that we remember from when they were fifteen.

Duncan: They have kids now! And so do we!

Simon: Being in a boy band when you are young, you ‘have’ to be single. But now our fans have grown-up with us, they’ve got their own families and they love us for our music, not just as a poster on the wall and a pretty face that they might fancy.

Caroline: Are they making a different connection with Blue’s music?

Duncan: It’s a lot deeper now. And with things like Facebook and Twitter you can communicate so directly with them and hear what they think of it.

Caroline:  How would you describe your sound now? How has it changed?

Duncan: We did bubblegum pop, it was more innocent. Now some of the lyrics are deep and almost dark. We’ve been broken, we’ve known how it feels to be heartbroken

Caroline: Do you bring in your own experiences when you write?

Duncan: When I was younger, I didn’t really understand love. It wasn’t until I fell in love that I started listening to musical lyrics and relating to what the artist was saying. I put Mary J Blige on in my car and get so deep into the songs I’m driving with tears streaming down my face.

Lee: But when you are in your late teens or your early twenties, you should be having fun, the only love you know is a puppy love, you slip from one thing to the next.

Simon: I’m glad I lived earlier on in Blue… we had a lot of fun. Traveling, meeting different fans all over the world, you know, we had fun…

Caroline: Who had the most fun out of all you?

Duncan: We might write a tell-all book! It would be quite explicit…

Caroline: Can’t wait. How did you pick the first release from your new album?

Lee: It had to be a big ballad because we wanted to show off our voices. There are not many groups that can sing like Blue, we’re all strong, we don’t just have one ‘voice’ or one ‘pretty boy’.

Simon: We performed on This Morning earlier and all the producers came out and stood at the side to watch us and everybody was like “Wow”. Eammon Holmes came up and said to us: “It’s so nice having a band coming in and doing it totally live. You can really sing, all of you”. It was almost like they were shocked, but it was a good shock, that a band could just come in and sing like that. A lot of performers use playback, or have loads of voices played over the track to drown theirs out.

Lee: We don’t mean to blow our own trumpet, but we have matured. This is not just the first album back, this is the first of many to come.

Caroline: You’re performing live at 02 Shepherds Bush Empire on 3rd May, is that exciting? Or is it kind of nerve-wracking?

Simon: It’s scary doing a ‘coming home’ show because of all the other boy bands out there now… One Direction, JLS, look at what Take That has done! It’s like, where are we actually gonna fit?

Caroline: Is there any advice you would offer to the newer, younger bands?

Lee: Just to enjoy it cause you never know when it’s gonna end. Take the work seriously but don’t take yourself too seriously.

Simon: I think the one thing that we’ve learned from this industry, from having it all and losing it all and getting it back again, is that you have to enjoy it while it’s still there.

Duncan: When you are doing well record companies want to milk you, you are a product to them. And eventually you have nothing left to give. That was our problem, we had a burn-out. It’s really important to get rest and down time, so you can recharge.

Lee: I got nodules because I came straight off tour with Blue and in to a promo. They were running me into the ground and I got really ill.

Simon: Your health is more important than anything. You gotta make sure get your six hours a night sleep. We were sometimes running on an hour…

Duncan: Know your limits. The most important thing is to stay tight with your boys or your girls, and don’t let the people around you influence you too much.