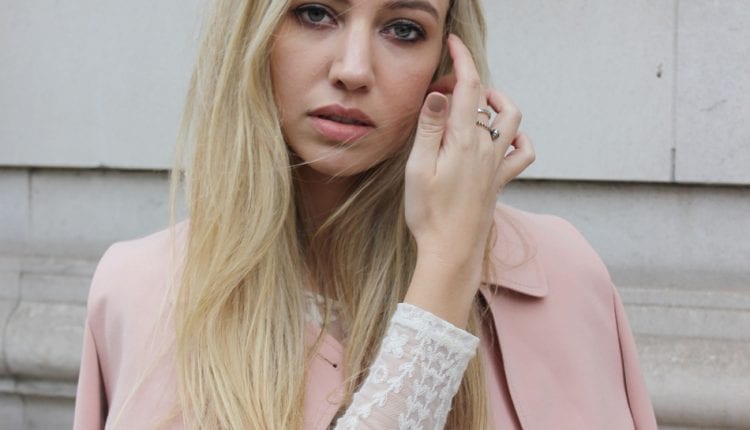 For as long as fashion blogger and YouTube presenter Scarlett Dixon can recall, she has always suffered with symptoms of irritable bowel syndrome (IBS), a common disorder of the digestive system with symptoms such as bloating, abdominal pain and urgent and unpredictable bowel movements.   ‘I remember having a sensitive gut going way back, even being sent home with a poorly stomach on my eighth birthday,’ she said. When she was at school and the pressure of exams and finals came around, the symptoms began to intensify with bouts of diarrhoea and constipation which lead to her suffering with anxiety. ‘At this stage I had a couple of blood tests and an ultrasound scan, which resulted in my IBS diagnosis at 14,’ she explains. Scarlett remembers being handed a leaflet about the condition and being told that she should just get on with life. ‘On a bad day I would need to go to the toilet 12 times a day,’ she added.

Scarlett suffered with severe bloating, a common symptom of IBS, and resorted to buying a range of clothing sizes 12-16 to accommodate her fluctuating tummy. ‘I was trying to navigate being a teenager with all these embarrassing symptoms, and it was so all-consuming and unpredictable,’ she recalled.

The lifestyle blogger remembered an experience in which she woke up in the middle of the night with excruciating stomach cramps and called 111, begging for an ambulance. ‘It sounds dramatic, but I honestly thought I was dying—it really was that awful and I couldn’t believe it wasn’t something really serious.’

After several unsuccessful visits to the doctor that resulted in being ‘told I needed to get my emotions in check and to get some counselling, or had anti-depressant medication pushed on me,’ Scarlett decided that enough was enough. She began to take matters into her own hands and that started with a closer look at her diet.

In 2016, at a networking event held for bloggers, Scarlett was introduced to the probiotic supplement Alflorex. ‘I’d tried probiotics before, but the dairy type was no good for me and many have to be kept in the fridge, which is incompatible with my lifestyle,’ said the jetsetter. ‘Whatever they have done in terms of resetting my flora has really helped.’

‘On top of the diet changes I have made it has really helped me to get in control of my symptoms and it feels so good,’ she added. Without Alflorex, something so simple as sharing a room with friends on holiday wouldn’t have been a possibility. ‘I feel like I have my freedom back.’