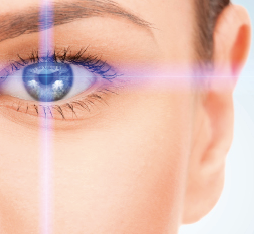 Although laser eye surgery isn’t currently available on the NHS for people that just want to improve their eyesight, it is one of the most popular procedures in the UK. A solution for improving eyesight and cancelling the need for glasses and contact lenses, vision correction can significantly enhance quality of life as well as boost self-esteem.

Laser vision correction (LVC) aims to correct four major refractive errors—problems caused by an imperfectly shaped eyeball or cornea. Near-sightedness, also known as myopia, causes close objects to appear sharp and far objects to appear blurry. This condition is due to a curved cornea and a longer eyeball. Far-sightedness, known as hyperopia, causes the opposite and is due to a shorter eyeball or a cornea that is flatter than normal. Individuals affected by astigmatism will see objects blurry at any distance—in this scenario the cornea and lens are shaped so that images aren’t focused on the retina. Lastly, presbyopia, or ageing eye, occurs when the eye loses the ability to focus due to ageing. This usually happens between the ages of 40 and 50.

There are three main types of laser vision correction (LVC) procedures: LASIK, SMILE and surface laser treatments. LASIK (laser in-situ keratomileusis) is performed with two lasers: one opens up a thin ‘flap’ in the surface of the cornea while the other reshapes it. At the end of the procedure the flap is put back and stays in place without the need for stitches. Surgeons performing SMILE (small incision lenticule extraction) surgery, on the other hand, will reshape the cornea through a small, self-sealing hole. Other surface laser treatments—which include PRK, LASEK and TransPRK—will consist in removing the skin covering the cornea to allow the surgeon to reshape it with a laser. In this type of procedure, the cornea grows back naturally. Although all three types of surgeries yield similar results, it is important for patients to discuss with their surgeon which route is best for their individual needs. While they are relatively painless procedures, there are some stages which patients might find uncomfortable. To prepare, the surgeon will put anaesthetic eye drops in the eye to make it numb. Once this has taken effect, a speculum is placed on the eye to keep it open. Some patients have reported feeling slight pressure during the procedure itself.

What Diet is Right For You?

Helping Kids Save with a Junior ISA

Find Your Mattress Match with Sleepeezee

A Dairy Alternative With All the Nutrients of Milk

Why is Sleep so Important to our Health?