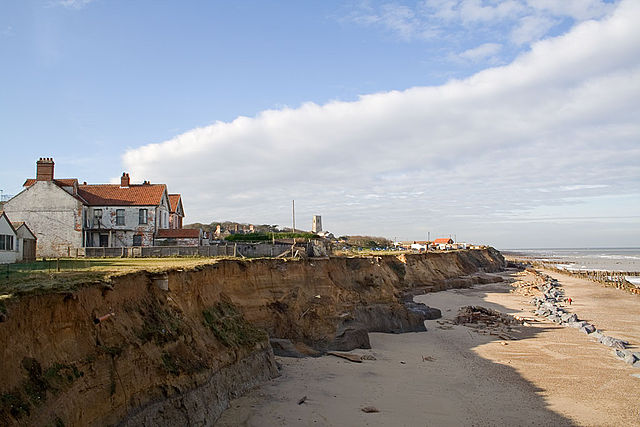 The Environment Agency has warned that some coastal communities will be destroyed by coastal erosion as climate change causes a rise in sea levels.

Sir James Bevan, chief of the agency, warned in a speech to the Flood and Coast conference in Telford that that flooding and cliff erosion will reshape the coast, and that there will be no choice but for local communities to move, as there’s no practical solution to the problem.

“In the long term, climate change means that some of our communities – both in this country and around the world – cannot stay where they are,” he said. “That is because while we can come back safely and build back better after most river flooding, there is no coming back for land that coastal erosion has taken away or which a rising sea level has put permanently or frequently under water.”

He added: “Which means that in some places the right answer – in economic, strategic and human terms – will have to be to move communities away from danger rather than to try and protect them from the inevitable impacts of a rising sea level.”

The environment Agency has a three-pronged approach to flood risk management; protection, resilience and adaptation. The ‘adaptation’ part would involve measures such as relocating coastal communities, as the climate crisis means that “in the face of climate change we will need to adapt both how and sometimes where we live”.

“Flooding along our rivers and coasts is one of the key risks of climate change in the UK,” agreed Professor Daniela Schmidt from the University of Bristol, adding: “While early warning systems can reduce risks, managed retreat is a reality which we need to face. Nature, helping to protect us from flooding, is itself under threat from climate change but also from decisions we take to protect our infrastructure and homes.”

The process has certainly already started, as Welsh council has announced its intention to abandon the village of Fairbourne to the sea in 2054, and in other places in the UK homes have been lost or are expected to be lost within decades. The Climate Change Committee, which advises the government, predicts more than 100,000 properties could be at risk of coastal erosion by 2080, and the Environment Agency has already warned that it will be too expensive to protect many coastal communities.

In addition, risk analyst Dye & Durham has suggested that more than 7.65 million properties in Great Britain could be exposed to medium or high risk of soil subsidence by the 2080s – an increase of over 1.89 million individual property addresses – as a result of climate change.

With the Met Office projecting hotter, drier summers in the future, heatwaves increase the likelihood of soil shrinkage, which can create downward movement in buildings located on vulnerable soils. This is worse in clay soils that are found across the south east of England, and has the potential to move foundations, cracking walls and ceilings, resulting in expensive insurance claims and repair bills.

The data, from Dye & Durham’s Climate Report, suggests that more than 5.76 million properties in Great Britain are today exposed to medium or high subsidence risk, potentially increasing to approximately 6.64 million in the 2030s. Specifically, just over half a million more properties (547,317) could be at high exposure in the next 60 years, compared to today’s figures.

Dye & Durham’s Head of Science, Dr. Tim Farewell, one of the UK’s leading academics on the interaction between geohazards and the built environment, said: “We’re modelling future environmental hazards and our data indicates that over the coming decades, we will see even more hotter, drier summers as a result of our changing climate. These conditions are of real concern as they are likely to result in an increase in both the severity and frequency of climate-related impacts to our homes, infrastructure and, more worryingly, the health of vulnerable members of our communities.

“We believe that if we can increase awareness of climate change, more people will become engaged and want to clearly understand how this is likely to affect their home in the future. In doing so, they can take practical steps now to help mitigate risks posed by the changing climate and increase overall resilience.”

The subsidence data quoted above has been calculated for properties in Great Britain and is based on a Medium Emissions Scenario (RCP:4.5 Equivalent to 2.4°C global warming by 2100s).