The End of the Show for Ellen Degeneres 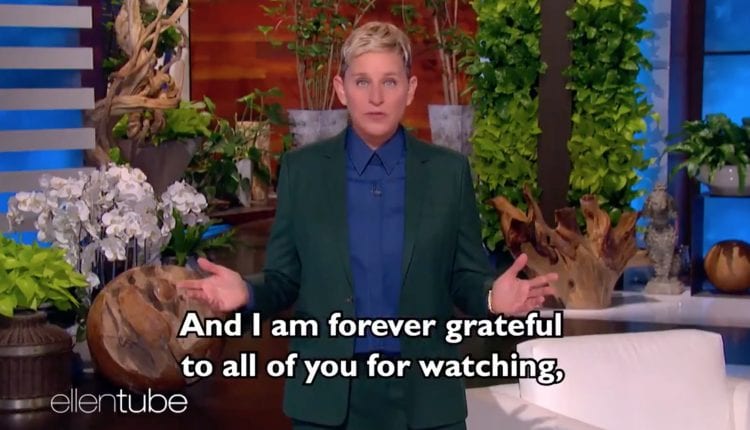 Popular chatshow host Ellen DeGeneres has announced that the show is ending because “I truly have felt like next season was the right time” to bring it to a close.

“The truth is, I always trust my instincts. My instinct told me it’s time,” she said in her latest episode. But what wasn’t mentioned was the accusations of a toxic work environment that put the talk show under a cloud last year. Ellen Degeneres delivered an apology on air last September, and since then three senior producers have lost their jobs.

It’s the latest shock development in the career of the 63-year-old, who says that she had decided to finish the show after its 19th season, in 2022, before the scandal erupted.

See also: Are You Ready for the Eurovision Song Contest 2021?

“Two years ago, I signed a deal for three more years and I always knew in my heart that season 19 would be my last,” she says on her latest episode.

The Ellen DeGeneres Show has been on air since September 2003, has broadcast more than 3,000 episodes, and has won more than 60 Daytime Emmy awards, the most recent when it was named outstanding entertainment talk show in 2020. But Ellen Degeneres recently told the Hollywood Reporter: “As great as this show is, and as fun as it is, it’s just not a challenge any more.”

She told the website that last year’s allegations that the show’s workplace was “dominated by fear” were not a factor in her decision to pull the plug. “If I was quitting the show because of that, I wouldn’t have come back this season,” she said, while admitting it “destroyed” her to see “everything I stand for… attacked”.

See also: Like a Bat Out of Hell: Jim Steinman’s 10 Greatest Hits

The show, made by the ABC network, features a mix of comedy, interviews and human interest stories, and has been a ratings success for many years, though in recent seasons viewing figures have declined. Variety magazine said: “Ellen DeGeneres’ legacy, for years, appeared to be her urging the public to “be kind,” a slogan that was strikingly vacuous and empty even before the unkindness of the work environment she led became public knowledge. While she certainly still has fans, as well as the loyalty of a community of Hollywood stars that never stopped appearing on her show, it’s hard to understand what the driving force behind DeGeneres’ show will be in the year ahead.”

The decision to bring the show to an end will be made in a pre-recorded opening monologue, where Ellen says: “I want you to know that I’ve thought a lot about this decision. I sat with it for a while. I meditated on it.” Ellen will be joined to discuss the news by Oprah Whinfrey, whose own final season was seen as a broadcasting triumph, and by singer Pink, who will sing the theme song.

Ellen Degeneres’ career has suffered setbacks before. She made her name as a stand-up comedian then starred in two sitcoms, Ellen from 1994 to 1998 and The Ellen Show from 2001 to 2002. During the fourth season of Ellen in 1997, she came out as a lesbian in an appearance on The Oprah Winfrey Show. Her character, Ellen Morgan, also came out to a therapist played by Winfrey, and the series went on to explore various LGBT issues, including the coming-out process. In 2008, she married her longtime girlfriend Portia de Rossi. But the decision to come out both on the show and IRL was seen as contributing to a decline in its popularity.

She said: “In 1997, I knew it was time to come out on my sitcom and live my truth. Back then, I had a vivid dream that a bird flew out of a cage and set itself free because it needed to get out of that cage.

“Recently, I had a dream that a bird, a beautiful bird with bright red feathers, came to my window and whispered, ‘You can still do stuff on Netflix,'” she jokingly added. “And that was the sign I was looking for.”

She told the Hollywood Reporter: “As great as this show is, and as fun as it is, it’s just not a challenge any more.”

She told the publication last year’s allegations that the show’s workplace was “dominated by fear” were not a factor in her decision to pull the plug.

“If I was quitting the show because of that, I wouldn’t have come back this season,” she said, while admitting it “destroyed” her to see “everything I stand for… attacked”.

Ellen is an executive producer on ABC’s Repeat After Me, a half-hour reality series inspired by a highly successful signature segment from The Ellen DeGeneres Show. Ellen also teamed up with Steve Harvey to executive produce NBC’s Little Big Shots, an hour-long show that highlights the world’s most talented kids.

As a movie actress, she starred in Mr. Wrong (1996), EDtv (1999), and The Love Letter (1999), and provided the voice of Dory in the Pixar animated films Finding Nemo (2003) and Finding Dory (2016); for Finding Nemo, she was awarded the Saturn Award for Best Supporting Actress, the first time an actress won a Saturn Award for a voice performance. In 2010, she served as a judge on the ninth season of American Idol.

The announcement of the end of the show has been posted on Ellen Degeneres’ Twitter feed.