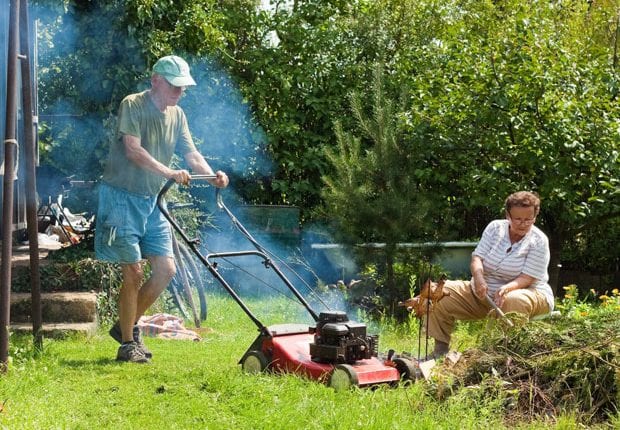 Spending time tending the garden, however large or small, is one of the nation’s most popular pursuits. Many people are not content just looking at it, however, loving nothing more than rolling up their sleeves and digging over the vegetable patch, trimming trees, beautifying the flower beds and mowing the lawn.

The desire and effort is commendable, but this beloved activity can come at a considerable cost. It might surprise you to know that every year in the UK over 400,000 people are sufficiently hurt in their gardens to have to go to hospital, and more than 120,000 of them are children. The most common accidents in the garden are falls, cuts, and being stung by things, but in my own GP practice I have seen everything from wasp and nettle stings, plant allergies, chain saw injuries, right through to corneal abrasions of the eye, tetanus, splinters under the finger nail and slipped discs.

Incidentally—before you open the shed door—the most dangerous garden tools to yourself and the children, are, in order of greatest hazard: lawnmowers, flowerpots, secateurs, pruners, spades, electric hedge trimmers, plant tubs and troughs, shears, forks, hoses, sprinklers, and garden canes and sticks. Unless you’re careful, it’s a potential war zone!

I’m keen to get my greenhouse in order this winter and start planting for next summer, and I’m interested in foods that are supposed to protect against cancer. What fruit or vegetables should I be growing to help keep me healthy?
The World Health Organisation recommends that five portions of fruit and vegetables should be eaten on a daily basis to help protect against cancer. These foods contain naturally occurring powerful antioxidants which mop up damaging free radicals, which are bi-products of environmental pollution. Fruits and vegetables are all rich in fibre, which is thought to be vital in reducing colonic cancer incidence. The highly coloured vegetables such as carrots, peppers and tomatoes are good choices, but peas, beans, onions, leeks, celery, potatoes, lettuce and cauliflower are all easily grown in this country. Fruits are trickier in our temperate climate, but many of the berries such as blackberry, gooseberry, raspberry, strawberry, plus many of the currants are easily grown. Apples, pears and plums should all provide a healthy yield in more ways than one. I was going to add rhubarb, but of course, strictly speaking this is a vegetable.

Read about how to grow your own greens

I read that a huge number of ordinary plants are toxic and poisonous. I knew about the obvious ones like deadly nightshade, but can you give me any information about others? I know you get asked this all the time, but with my grandchildren visiting regularly, it’s an ongoing worry.
Plants that are poisonous to eat include foxglove, hemlock, laburnum seeds, aconite and not just the black berries of deadly nightshade which you mention, but the red berries of holly as well, as well as many other types of berry. Irritant skin reactions can occur in response to contact with hogweed, nettles, primula and poison ivy. Although this initial list may seem frightening and your grandparental concern is appropriate, you shouldn’t worry too much as serious accidental poisoning from plants is relatively rare.

My husband is an enthusiastic cactus grower and has hundreds of different varieties all over the house—and they are gradually taking over the garden, which at least keeps burglars away! However, I am forever getting hundreds of tiny spines stuck in my hands and forearms as I clean. What’s the best way of removing them? My husband just tells me to scour them off with a Brillo pad!
Interestingly enough, the prickly pear is widely cultivated and naturalised in many temperate areas now, and was originally used in Africa and many Mediterranean areas expressly as a burglar-proof garden fence, as they are large and bush forming. However, the cactus spines, hooks and glochids of many species commonly cause a nasty irritant dermatitis and can even be transferred from the fingers and hands to other, more sensitive parts of the body. The application of warm wax, glue, sticking plaster or Sellotape to the irritating area followed by swift ripping off is considered the best technique for removal.

A quick one, doc! Are diseased trees that are dying, or even dead, a health risk to my family? I have a dead willow tree and a diseased maple tree in my garden and haven’t got round to taking them down. The wife is going mad! Please tell me I haven’t got to fell them both tomorrow if we are all going to survive.
The dead trees will not harm you but your wife might! Her bark could be harsher than the willows or the maples, and you wouldn’t want the roots of this domestic disagreement to penetrate further. For better or for worse, get out the axe!

Living Apart in a Plurt

I read somewhere that there are some plants that actually absorb the smell of ammonia. My elderly mother who lives with us is rather incontinent of urine and I would love to find a natural way to help remove the odour without using yet more aerosol sprays. Most products seem to either mask the smell or make it even worse. Tell me what these plants are, and if they really work?
Plants reputed to be effective at soaking up ammonia-based smells from the air include Lady Palm (Rhapis excelsa), tulip or bulb and Pot Chrysanthemum. All of these make great plants, therefore, to have in the loo as well as in your elderly mother’s bedroom. Whilst we are exploring this, why not kit out the bathroom moisture absorbers that map up unwanted condensation. Buy Dendrobium orchids (Singapore orchid), Bromeliads and ferns.

I’ve recently acquired a fairly powerful strimmer and would like to know what sort of protective gear you would recommend to protect me from any injury? I’m 51, female and recently divorced, and I’m desperately trying to be independent and stop calling on all my grown-up children and friends—and they are all waiting for me to end up in Casualty!
The most important thing to remember when using a strimmer is to protect your eyes from flying debris such as grass, stones, earth and bark. I’ve seen too many nasty injuries for comfort. Wear proper protective goggles bearing the BS Kite mark and always wear boots to protect your feet and ankles. Ideally, wear earmuffs if the strimmer is loud, and never operate it too close to other people. Good luck with everything in the future.

I fell and badly grazed both shins whilst re-gravelling our drive recently, and despite applying antiseptic cream and a few plasters, the wounds haven’t healed. They are quite red, quite lumpy and tender. My wife says I should see the doctor, but is this really necessary?
It may well be that there are some tiny bits of gravel still embedded in the skin responsible for those tender lumps. If so, healing will be seriously delayed and the possibility of infection quite real. It is all very well being stoical and not bothering the doctor, but if you subsequently develop skin and bone infections like cellulitis and osteomyelitis you won’t really have done anyone any favours, will you?

Whilst out walking recently my eight-year-old grandson got his jumper caught on an electric fence which seemed to give him quite a shock. It took a few minutes to rescue him during which time he obviously received a number of jolts. My daughter is now terrified that he may have some permanent damage, and furious with me for not supervising him sufficiently. Can you reassure us both that no harm has been done?
No harm whatsoever will have been done, although the very mild shock which these agricultural electric fences deliver are certainly not very pleasant, especially for a wee child. They are intended, of course, to keep sheep, horses and cattle in rather than human beings out, and they are effective for the simple reason that the animals don’t like the muscle twitching which the electric current causes any more than you poor grandson does. Bet he won’t be straying too far off the beaten track in the future! Please reassure your daughter that not only is her child fine, but also that you were not being negligent in looking after him—on a country walk it is so easy to inadvertently get clothing snagged on barbed wire—electric or not. I’ve done it myself regularly, as have all my family, as we live out in the country amidst farmland.

SEE MORE: Things to do for your garden in winter

The Top Garden Trends for 2020