As the resident doctor on ITV1’s Daybreak and Lorraine, Dr Hilary Jones has been the voice on health topics since 1989, when he first landed on the TVAM sofa. Chatting to Kerry Spencer, Dr Hilary reveals what first led him to become a television doctor, his thoughts on the NHS and how an adventurous streak saw him spend a year on an isolated south Atlantic island 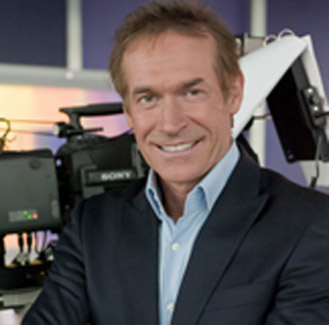 As one of the country’s most recognisable faces of morning television, what has been the most positive aspect of your role as a TV doctor?
It’s particularly worthwhile when we make a tangible difference to the lives of viewers. For example, when we did the campaign to raise awareness of the rash that you sometimes experience with meningitis and septicaemia, we had lots of people calling in to say, ‘Thank you to the programme. If I hadn’t watched Daybreak I wouldn’t have recognised the signs of the rash and doctors have told us that if we hadn’t got our child to hospital when we did, we might have lost them.’ That, for me, is a fantastic use of TV, when it potentially saves lives.

What was it that prompted you to become a TV doctor in the first place?
I’d been practicing as a GP for a while and I was good at getting across health messages to patients on a one-on-one basis. On TV you can get across important health messages to millions of people in one easy hit – for me, that’s a powerful thing to be able to do. I thought, as I was good with patients, I could use the same skills to get across messages to a far bigger audience.

You first became the resident doctor of TVAM in 1989 and have been with the station ever since. How did this role come about?
I wrote to the company and said, ‘Give me a job!’ TVAM were using many different [health] specialists who would sometimes talk in medical jargon, which doesn’t necessarily translate to the viewer. It was my idea to use one doctor in the family of presenters as the resident doctor to cover a different health story each day. Luckily, that coincided with the views of the managing director at the time and he asked me to come in for a few weeks for a trial. Fortunately, it worked out and 23 years later, I’m still here.

What health stories cause the biggest reaction among viewers of the show?
The stories we’ve received the biggest response to have included the meningitis story, guidelines on cosmetic surgery, the truth about gastric banding, resuscitation of babies and the more controversial ones such as getting to the bottom of MMR, which we now know isn’t linked to autism, and what parents need to know about other vaccines available to their children. I’ve also been thrilled to have been involved with stories in Sierra Leone to bring meningococcal vaccines to under fives and going to Kosovo during the war in the ‘90s to look at the health problems caused there. More recently I had the chance to go to Haiti after the earthquake in 2010. We will receive messages after a show from viewers saying how they really enjoyed the show or maybe a few months later, thanking us as we’d somehow made a difference to their life.

How involved are you with deciding on what health and medical topics to cover on Daybreak?
I’ll suggest topics that I think will be popular and the editors will look at what subjects are topical on that particular day. At the moment, the breast implant scandal is what’s topical. For me, the most important thing is how we can help our viewers – so with the breast implant story it’s to explain things like what to do if this is happening to you, where to go and what steps to take. Whereas the newspapers will focus on how many people it is affecting and who is to blame, which doesn’t necessarily help the audience. We do react to news too, but it’s also important for me to cover those subjects that aren’t necessarily the most exciting, but important messages to get across to viewers, such as when did you last have a smear test, or get your cholesterol or blood pressure checked. The sudden death of a celebrity or health problems with members of the Royal family can also dictate what we cover on the show. Prince Philip’s recent ill-health over the Christmas period meant we focused on coronary heart disease.

What have been the most memorable moments as a resident doctor on morning television?
There have been lots, however, getting a call from someone to say that Michael Jackson had died stands out, that was pretty dramatic. I was given just a little bit of information to go on air with, and had to give an opinion on what might have gone wrong based on the media speculation

From Anne Diamond to Eamonn Holmes, you’ve worked with many television presenters over the years. Which presenters have you enjoyed working with the most?
I’ve enjoyed working with all of the presenters I’ve had the opportunity to work with. Some presenters have been more interested in the medical topics than others. Fiona Phillips actually trained for a while as a radiographer, so she was always particularly sympathetic and very good with the guests we had on the show.

Was it a surprise to you when you heard about the departure of former presenters, Adrian Chiles and Christine Bleakley, at the end of 2011?
It was a surprise to me. The first I knew about it was when the newspapers published the story. The expectations were very high on Adrian and Christine to push the ratings up. Editors have their own ideas and there are flavours of the month with presenters. What’s good one month might not necessarily be popular the next, as we’ve seen in past.

What are your thoughts on other health television shows, such as Embarrassing Bodies?
I think there is plenty of room for Embarrassing Bodies and any show that will get clear medical messages out to an audience. People are interested in the previously unmentionable topics that break the last taboo, which Embarrassing Bodies is very good at. This type of show is valid because people do have smelly armpits or warts in awkward places and do find it difficult to talk to someone face-to-face about these problems.

How has the NHS changed over the years that you have been working for the service?
Fundamentally, the people who work within the NHS solider on despite the interventions of politicians. People who work at the coalface of the NHS are brilliant, hard-working, caring and do a fabulous job. If only they were left alone to get on with it, the NHS would be far better off. Unfortunately, we’ve seen so many untested and unproven reforms, it’s a miracle the NHS still survives sometimes. I’m always trying to speak up for NHS staff and praise the good work they do. Having said that, if I feel patients are being hard done by, I’m equally happy to raise awareness of a scandal and lazy or negligent doctors.

What do you think could be done to improve the quality of service?
The general level of care and empathy provided for patients can always be improved. There seems to be a rising trend of bright and intelligent young doctors who don’t have caring skills and lack empathy towards their patients. I’m now vice president of the Patients Association and actively lobby health organisations and the government to improve the quality of service delivered to patients.

How do you think young doctors coming into the NHS or private sector could improve the quality of service they provide?
There are lots of talented and brilliant doctors coming into the system all of the time, but there seems to be more of an emphasis on doctors having lots of A-Levels and a degree, but they don’t always have human or caring skills, which is one of the most important qualities to have as a doctor. The ultimate quality one must possess as a doctor must be that you care about people and want to make a difference. There was a brilliant film a few years ago with William Hurt called The Doctor, where he plays an arrogant surgeon. He is humbled when he becomes a patient himself with throat cancer. All new doctors should watch the film!

You took part in Dancing on Ice in 2010. Do you have plans for any other celebrity shows?
I’d love to do Strictly [Come Dancing], as it would involve learning a new skill but as I’ve done Dancing on Ice, I don’t think I’d ever get asked – they don’t tend to ask you to do one if you’ve done the other. Shows like I’m A Celebrity Get Me Out Of Here would be interesting, especially from a doctor’s point of view, although I’d prefer to do another show if it involved learning something new, that’s why I agreed to Dancing on Ice. I did a celebrity special of Who Wants to be a Millionaire recently, pairing up with Andrea McLean. That was a lot of fun. We reached £150,000, which half of which was donated to the Meningitis Research Foundation.

Do you have plans for more books or other projects aside from your current role on Daybreak?
I have a new book planned for next year, which is currently in the very early stages, so I can’t reveal too much about that. This year I am launching more apps, including Dr Hilary Jones Consults on Pregnancy, to give people advice when they might not have access to a doctor, but have their phone to hand, and I will be continuing the work I do for many different charities.