If you are out in central London from today, you might get the chance to lie back and relax on a work of art designed by a celebrity. 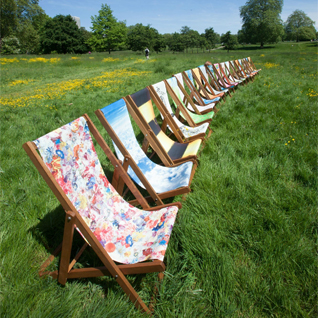 550 designer deckchairs will be unfolded in five of London’s central Royal Parks. They have been created by Ronnie Wood, Harry Enfield, Miranda Richardson, Julia Bradbury, Take That’s Howard Donald and Chris Beardshaw, as well as luminaries from the world of art, including Michael Craig-Martin, Susan Stockwell and Maggi Hambling.

The new designs are part of Deckchair Dreams, a stunning collection of limited edition deckchairs sponsored by Bloomberg and produced by the Royal Parks Foundation in its 10th anniversary year to celebrate a decade of helping support the magic of London’s amazing Royal Parks.

This year’s collection is the fifth since the project started in 2006. Previous collections have showcased work by Tracey Emin, Damien Hirst, Joanna Lumley and Alexander McQueen.

Based on the theme of ‘Nature’s Grand Designs’, the 2013 collection will feature specially commissioned deckchairs by celebrities from the worlds of visual art, music, performing arts and design, who have drawn inspiration from the natural world. Bloomberg staff and local community groups have also had the opportunity to submit designs via a competition. Work from two local schools, an arts group and Age UK residents will all feature in the collection, which will be out in Hyde Park, The Green Park, St James’s Park, Kensington Gardens and Regent’s Park from July 4th until the end of October.

This innovative public art adventure aims to promote nature, art and design to the Parks’ visitors, and to raise awareness and funding for cultural, heritage, education and conservation projects across London’s eight Royal Parks.

Sara Lom, Chief Executive of the Royal Parks Foundation, said: “Deckchair Dreams is all about bringing together art, design and the natural environment – as well as providing a stylish place to sit! This year’s collection does just that, with the inclusion of designs based on everything from bumble bee stripes to the idea of metamorphosis. We’re extremely grateful to all the artists who’ve taken part this year and who have provided us with another dazzling collection.”

Since 2006, more than £250,000 has been raised via the sale of the designer deckchairs, helping to support a range of work from a fungus survey in Richmond Park to new swings for the Diana Playground in Kensington Gardens. Funds raised this year are intended to support the restoration of five children’s playgrounds and assist with smaller projects, such as bulb planting and habitat management.

A nation of fitness failures

The Secret to the Ultimate Flawless Finish