Creating a Happy Bedroom For Your Child 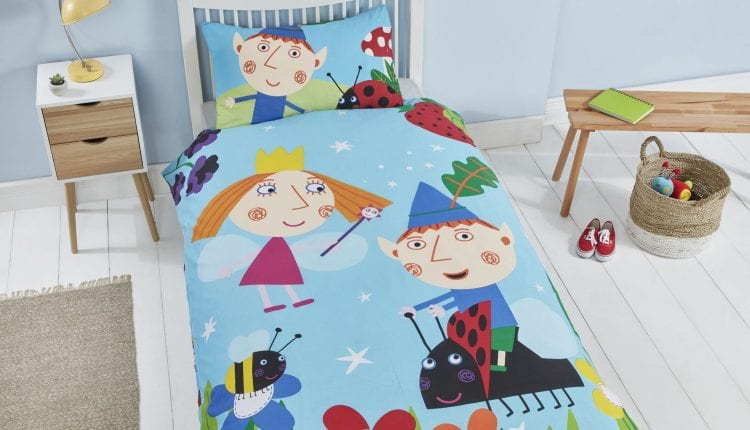 How much thought do you give to the décor of your child’s bedroom? Creating a happy space for them to play and sleep in is important for their development and to help them relax and feel safe. We asked the experts from Dreamtex for some tips.

Considering colour schemes, positioning of furniture and the effect of lighting are all significant decisions and contribute to the comfort and style of a room, but one of the key choices you or your little one has to make is what would they like on their duvet?!

From an early age, children’s bedding is part of every child’s life as they dream the night away under a cosy duvet cover and sink their head into a soft pillow. The bed is the most important piece of furniture in the bedroom and often features the biggest image on view, whether it is something contemporary or cool, cute or cuddly or a design of your child’s favourite character which captures their imagination. That character can play an important role in encouraging your child to actually want to go to bed, so it’s well worth thinking about this when shopping for your child’s first bedding set.

See also: Mask or No Mask? Are The New Rules Confusing?

Back in the 1990s, the Teletubbies took the world by storm and everyone clamoured for toys and merchandise from the show. Teletubbies bedding became the duvet set of choice for many families, with Po, Laa-Laa, Tinky Winky and Dipsy adorning the beds of pre-schoolers across the country.

Today, with more TV channels for children to watch and dozens of children’s shows available on demand and via YouTube, there are so many more bright and colourful characters to choose from. Children will channel hop between CBeebies, Disney Plus, Milkshake and Nick Jr to name a few, and they will inevitably fall in love with a particular character who catches their attention. As their loyalty towards that character grows stronger, it won’t take long before they will want everything in their room to be themed, from the duvet they sleep under, to the blanket they snuggle with, the cushion they sit on and the towel they dry themselves off with at bath-time.

Spare a thought for the companies who make these bedding sets and bedroom accessories though, as how do they predict which characters are going to be the most sought after and which designs the most popular?! It is a challenge to create bedding designs that will have stand-out in a market full of new and exciting characters, but there is plenty of choice for when you come to theme and decorate your son or daughter’s bedroom to best reflect their interests and loves.

More Than Just a Duvet…

So what should you be looking out for when choosing your child’s bedding? Most children’s bedding sets are available in different bed sizes and are reversible so you can mix and match designs and patterns to keep things fresh. Some sets glow in the dark or are uniquely shaped to bring a more playful look to a room, such as having racing car wheels on the corners. In another playful twist, some designs incorporate a fun, interactive play map on the reverse so children can role-play with their favourite toy figures and vehicles during their play-time.

The material choice for duvets is also an important consideration as you will naturally want your child to be comfortable underneath the covers. The most popular fabric in the UK is a 50% cotton, 50% polyester mix which when washed is easy to iron and soft to sleep under. Manufacturers are now looking at their sustainability commitments and are introducing ethical fibres into their bedding production, with some duvet sets now using material made from recycled bottles to help protect the environment. Packaging is also now moving towards recycled card rather than plastic bags.

As your child grows out of a character and their tastes and interests change though, don’t fret that you won’t be able to find a fun duvet for their beds anymore. Duvet designs cater for all ages, with a host of popular themes, from children’s publishing and classic anime to football clubs and console games, so there really is something for everyone!

Dreamtex is an award-winning, boutique bedding company specialising in creating happy bedrooms by bringing everyone’s favourite characters to life through innovative bedding designs and home accessories. Popular homewares collections include The Gruffalo, Hey Duggee, Bluey, Bing, PJ Masks, L.O.L. Surprise!, Hot Wheels, NASA, WWE and Xbox and they are available from retailers such as Argos, Next, Very.co.uk, Studio.co.uk and Coco Moon at Amazon. Visit www.dreamtexltd.com to find out more.

Staying Connected in a Retirement Community