Coronation Street – The Soap Opera That Set a World Record 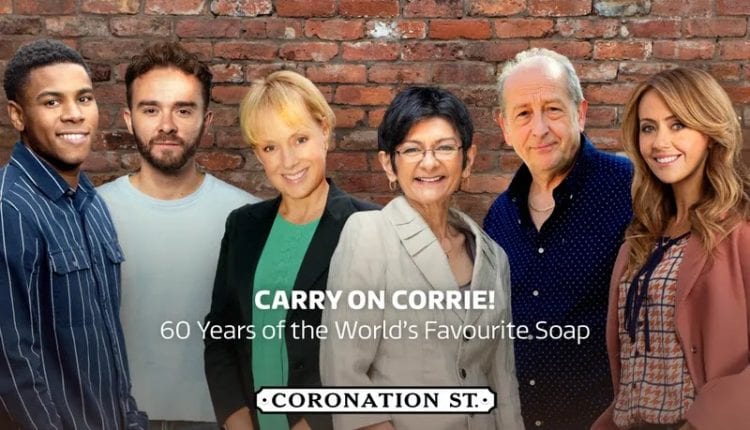 ITV soap opera Coronation Street has had a world-beating run – how many of its highlights to you remember?

ITV’s soap opera Coronation Street is coming up to its 60th anniversary, and its place as the world’s longest-running soap opera has been recognised by the Guinness Book of World Records.

Coronation Street became the world’s longest-running soap opera in 2010, but now the Guinness organisation has updated its certificate, along with recognising the contribution of its longest-serving cast member William Roache, who plays Ken Barlow.

Coronation Street and William Roache took the records after US soap As The World Turns was cancelled in 2010, having debuted in 1956.

Coronation Street officially turns 60 on 9th December, and William Roache, who has played Ken Barlow since “Corrie“‘s debut in 1960, said that it had given him “a lifetime of wonderful memories”.

The updated certificate was accepted by cast members Sally Dynevor and Joe Duttine, who play Sally and Tim Metcalfe, while Wlliam Roache, the world’s longest-serving TV soap star, received his own certificate during a break in filming.

“I have been very fortunate to have been in this wonderful programme which has carried me into this world record,” said Roache, 88.

Born in Derbyshire in April 1932, he is the only cast member to have remained on the show since its beginning

Set in the fictional northern town of Weatherfield, and originally meant to be entitled Florizel Street, the series was intended to run for only 13 episodes. At the time Daily Mirror columnist Ken Irwin predicted it would not last more than three weeks. In February 2020 the show aired its 10,000th edition, an hour-long special full of references to the drama’s eventful past.

Series producer Iain MacLeod paid tribute to William Roache’s “singular, spectacular accomplishment”, saying “I heartily congratulate him for his peerless professionalism, unstinting commitment to the show and ongoing brilliance as an actor.”

As part of its countdown to Coronation Street‘s 60th anniversary, ITV has been posting congratulatory messages from celebrities, viewers, charities and other television shows, including Joanna Lumley, who appeared in the show as Ken Barlow’s girlfriend in 1973.

Coronation Street and Roache took the records after US soap As The World Turns was cancelled in 2010, having debuted in 1956.

Though the series is known for its light humour and comic characters, it has always courted controversy, with a number of storylines that created dispute and debate in the media and caused public outcry from viewers.

Popular storylines have included the jailing of Deirdre Rachid in 1998 and the criminal spree of Pat Phelan from 2016–2018. Other media coverage has come from the treatment of its stars, including the sacking of Peter Adamson (Len Fairclough) in 1983.

When in 1964, Coronation Street appointed new producer, Tim Aspinall, he decided on a ‘new broom’ policy, and initiated ‘The Bloody Purge’ of 1964, with nine actors being sacked in total. Lynne Carol, who had played Martha Longhurst since episode two, was written out, her character dying of a heart attack.

Peter Adamson, who had played Len Fairclough since 1961, was sacked in 1983 for breach of contract. He had been warned by Granada Television for writing unauthorised newspaper articles criticising the show and cast.

In 1989, the character of Brian Tilsley was written out when actor Christopher Quinten left for Hollywood. The death of the character in a knife fight brought thousands of complaints from viewers.

Coronation Street did not feature a gay resident until 2003, unlike EastEnders which had gay-themed storylines in the 1980s, and Emmerdale which had a number of other gay characters, both male and female. In 2010 the soap introduced its first lesbian couple, Sophie Webster and Sian Powers.

Viewer interest has also been kept high by several murder mysteries, including Frank Foster’s in 2012 after the rape of Carla Connor, Tina McIntyre’s in 2014 to silence her over Rob Donovan’s shady dealings, and Ken Barlow’s (attempted) murder in 2017, during which fans were invited to post their ideas as to whodunnit.

ITV’s soap opera Coronation Street is now coming up to its 60th anniversary, and its place as the world’s longest-running soap opera has been recognised by the Guinness Book of World Records.

Should You Renovate Your Home, or Move House?