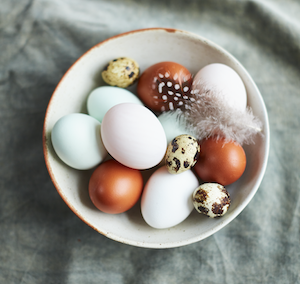 2018 marks the 90th anniversary of Clarence Court, the eggs favoured by famous faces from Mark Hix to Madeleine Shaw, and featured on the menus of the UK’s finest restaurants: proof they are as delicious today as they were back in 1928.

The fascinating history of these fabulous eggs is what makes them so unique. In 1928, a ship arrived in Britain from Chile, carrying a very extraordinary cargo. In its hold was a giant, 100-year-old Galapagos tortoise, two pygmy deer, a number of edible frogs, some exquisite alpine flowers from the foothills of the Andes—and three Araucana hens, laying pastel-coloured eggs.

This fauna and flora had been gathered by the pioneering botanist, collector and horticulturalist, Clarence Elliott. The tortoise—Tommy—became a great attraction at London Zoo, the newspapers reporting how he had been saved by Elliott, narrowly escaping being made into soup at a Chilean restaurant.

Ninety years later, Clarence Elliott’s three Araucana hens have a yet more enduring legacy: sent to Cambridge University they were crossbred over the years, eventually to become the exceptional ‘Old Cotswold Legbar’ the foundation bird of Clarence Court—a very remarkable egg farm. Clarence Court has revolutionised the way we enjoy eggs, to this day laying beautiful, colourful, hard-shelled eggs with deep golden yolks and a superior flavour, while creating an exemplary system putting the welfare of the birds at the forefront.

The health of the birds is paramount—only a strong, free-roaming bird with plenty of stamina, reared on a high-quality diet—which includes a mixture of maize, wheat, GM-free soya, marigold and paprika—in a natural environment, will produce the quality of eggs that Clarence Court has become so famous for.

Adrian Gott, managing director of Clarence Court, says: ‘We are extremely proud of our history at Clarence Court and that genuine heritage comes through in the flavour of our eggs. People who are passionate about food love discovering and experimenting with new ingredients. Now they can discover varieties of eggs that have been around for nearly a hundred years. Each Clarence Court bird is nurtured to produce the finest quality free range eggs available, just as they were all those decades ago.’

It is perfectly fair to identify the significant contribution Clarence Court has made to modern British cooking. The characteristic golden yolk in both the hen and duck eggs has inspired some of the countries most renowned chefs to put Clarence Court’s eggs centre stage on their menus. Vividly recognisable in handmade pasta or hollandaise, a creme brûlée or just a simple truffle scented, softly boiled Burford Brown, these eggs have become stars in their own right. One can only imagine the thoughts of Clarence Elliott had he known, ninety years on, the influence of his three hens. We think he’d be delighted.

Caring for Your Dog