Cheese and wine – the perfect partners 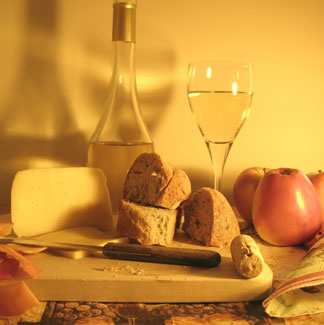 The key to matching cheese and wine – the key to matching wine with anything in fact – is balancing out components like acidity, salt, tannins and fat. Each of which is as important as the actual flavours themselves. ‘Matching wine and cheese is not the breeze it’s generally made out to be,’ asserts food and wine-matching specialist Fiona Beckett ‘and white wine is often a more congenial match than red. The problem is that most people fancy red with their cheese, so what to do?’
The question of what wine to match with any given cheese is, arguably, even more of a problem if you want to serve a cheese platter at the end of a delicious meal – especially as the chances are you’re going to want to serve more than one cheese.
‘You’re more likely to avoid a clash if you only offer one or two cheeses than if you offer several,’ advises Beckett. ‘And hard though it may be for cheese lovers to accept, it’s better not to let your cheeses get to the stage where they’re running off the cheeseboard. The stronger the cheese, the more difficult the match.’ So how do you go about working out which wine you should serve with your cheese platter? Here are just a few ideas to get you off on the right track.

Goat’s cheeses
‘Light, moussey goat’s cheeses work well with a crisp white wine like a Sauvignon Blanc,’ advises Beckett. Take your inspiration from the Loire Valley, which produces many such cheeses, and look for a Sauvignon Blanc from the region. If a Sancerre or a Pouilly-Fumé seem to pricey, try a white from Menetou-Salon, Quincy or a Sauvignon de Touraine. More mature goat’s cheeses can cope with the richer, punchier flavours of a New World Sauvignon Blanc – or you could even try an aromatic Viognier.
If you want to think outside the box, take some advice from Stephen Nisbet, sommelier at the Michelin-starred l’Ortolan. ‘Bosworth Ash, and English goat’s cheese, has a fudge-like texture and is sweet and nutty, without an overpowering flavour. As it matures, the sweetness is lost but the nutty flavour becomes more pronounced. Pair it with an Amontillado sherry or a dry Madeira.’

Soft cheeses
The more delicately flavoured soft cheeses, such as Brie or Camembert, are at their best with a soft, fruity red; try a New World Merlot or a Beaujolais, or a rich, slightly nutty white; a good quality Chardonnay with a bit of cellar time behind it would be good, but a Vin Jaune from Savoie would be even better. Alternatively, try a good, fruity cider as an accompaniment.
Richer, creamier cheeses, such as Vacherin, Epoisses or Waterloo, can handle fairly rich red wines. Try a ripe Pinot Noir from California, New Zealand or Australia, or try looking closer to home at reds. ‘Wines from the Côtes du Rhône are great with cheeses such as St Marcellin or Epoisses,’ says Patricia Michaelson, owner of London’s La Fromagerie.
Soft, creamy Chaource is traditionally matched with Chablis, while the smoky bacon flavours of a Langres works beautifully with Champagne. Both examples are instances of local cheeses and wines working well together, another good rule of thumb.

Pungent washed-rind cheeses
Washed-rind cheeses are, quite possibly, the toughest dairy challenge you can throw at a wine. The best chance of a wine match for a cheese like Munster or a Pont l’Eveque lies in a floral, aromatic wine like an Alsatian Gewurztraminer, or opt for a hoppy, aromatic beer instead.

Hard cheeses
Cheddar, that classic of cheese and wine parties, causes a fair bit of controversy when it comes to finding a match, even among the experts. Although Michaelson believes that partnering the cheese with red Bordeaux is, “a match made in heaven”, Beckett advises that oak-aged Chardonnay is the way to go: ‘It’s a case of like meets like; the buttery oak blends beautifully with the mellow cheese’. Nisbet suggests a dry cider as the perfect match. Given the lack of consensus, try your Cheddar with all three and see which works best for you.
Sweetly nutty hard cheeses, Comté, Gruyère or Beaufort for instance, compliment rich white wines. Again, aged Chardonnay works well, or you could try a herby, potent white from Southern France.
Drier, saltier hard cheeses like aged Pecorino or Parmesan cope beautifully with big red wines. A good Rioja is worth a try, but it’s worth heading in the direction of Italy, particularly southern Italy, in search of ripe, fruity reds.
Another potential direction for all these cheeses, is to look for a sweetish wine, as their salty flavours work well with a certain amount of sugariness. Look for a Maury or Banyuls from Southern France, a Vin Santo from Italy or Greece, or a Jurançon from Southwest France.

Blue cheeses
Forget even trying to match red wines to blue cheeses: the clash between tannins and salt can be truly vile. Although vintage or LBV Port is the traditional match for Stilton, I’d try something with slightly less tannin, such as a Tawny Port. Or, if you’re looking for an alternative Beckett says, ‘Stilton and marmaladey Tokaji [pronounced tock-aye] is a fantastic variation on the classic sweet wine and blue cheese combo.’
The other classic match of Sauternes with Roquefort can leave a deep hole in your pocket as Sauternes doesn’t come cheap. Instead try one of the other sweet whites made in the area, such as Barsac, Saussignac or Ste Croix du Mont. Alternatively, look for sweet wines made a bit further south, like the wonderful whites of Jurançon or Pacherenc-du-Vic-Bilh.

Come dine at mine

Get your 5-a-day with these tasty choices