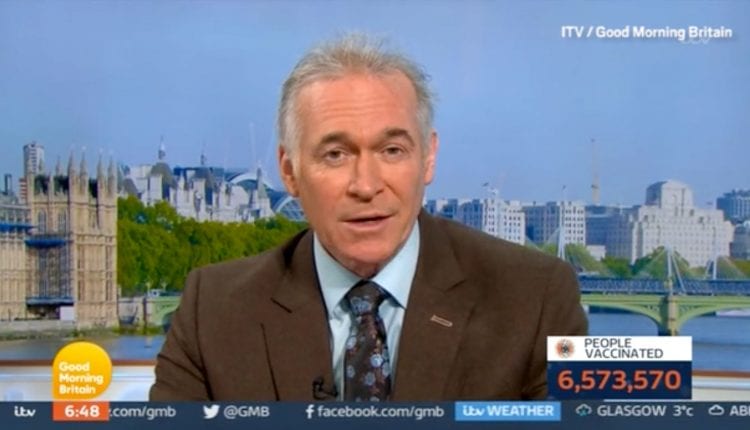 Celebrity doctors Ranj Singh and Hilary Jones (top of page) have both issued pleas to the BAME community to accept the COVID vaccination when offered, and not to listen to antivax conspiracy theories.

Speaking on This Morning, Dr Ranj Singh, celebrity guest editor of Healthy Child, urged people from Black, Asian and Minority Ethnic backgrounds to accept the Covid-19 vaccine if it is offered to them despite misinformation and fake news.

Earlier in January, the UK Household Longitudinal Study published findings highlighting hesitancy that some communities in the population feel about having the coronavirus vaccine.

See also: 1 Person In Every 50 in England Tests Positive for Covid

The poll found that 71.8 per cent of Black people were likely to feel hesitant about accepting the vaccine, and 42.3 per cent of people in Pakistani and Bangladeshi communities.

Drs Ranj Singh, Zoe Williams and Nighat Arif appeared on This Morning encouraging the BAME community not to refuse the vaccine when they are offered it. Dr Ranj Singh said that the vaccine is ‘here to help’, and that he had recently had the vaccination himself.

He said: “We have something that can help. There is absolutely no reason, no scientific reason for us to refuse the vaccine. Listen to the doctors in your community. Listen to the experts and other healthcare professionals in your communities like myself, like Zoe, like Nighat, who are standing up and saying we’ve had our vaccines, we believe in this vaccine, it’s the best thing we have.”

Dr Ranj Singh warned viewers not to listen to ‘fake news’ aimed at discouraging people from having the vaccination, saying; “There are small but very vocal groups out there who are targeting Ethnic communities because they know they are already naturally hesitant. The reasons for that are complicated, but they are targeting them and throwing misinformation that way.”

See also: New Coronavirus Treatment Tested As Third Vaccine Is Approved for Use in UK

One unfounded rumour in circulation is that vaccinations could affect fertility. Dr Ranj Singh commented: “Millions of doses have been administered worldwide. We haven’t seen a signal for that at all. There’s actually no scientific basis to it and that’s not a good reason for not having the vaccine.”

Dr Nighat Arif added that ‘All faith groups have said that the vaccine is safe – this is not a time for us to be in different camps, because our lives depend on us actually working together on this.”

Experts from SAGE the Scientific Advisory Group for Emergencies, have stated that trust in the vaccine is “Undermined by structural and institutional racism and discrimination… minority ethnic groups have historically been underrepresented within health research, including vaccines trials, which can influence trust in a particular vaccine being perceived as appropriate and safe, and concerns that immunisation research is not ethnically heterogenous.

Speaking on Good Morning Britain, Dr Hilary Jones, celebrity guest editor of Live to 100, assured viewers that the coronavirus vaccine is safe for all ethnicities. He said; “I think a lot of the hesitancy stems from historical and cultural problems from the past. BAME community populations haven’t been at the forefront of health care and health policies for so long, they’re wondering why they are now.”

See also: Why Organic Cotton Wool Is Best For You and Your Baby

With news that some mosques are being used as vaccination centres, Dr Hilary Jones explained: “It’s not for any sinister reason, they’re not being used as guinea pigs.” He mentioned potential concerns expressed by speakers some days earlier, and said: “It’s important we answer all those questions.”

A number of celebrities from the BAME community have taken part in a video to assure people that the vaccination is safe. Among those taking part are broadcasters Adil Ray, Ranvir Singh and Konnie Huq, comedians Meera Syal, Sanjeev Bhaskar, Romesh Ranganathan and Asim Chaudhry, and London Mayor Sadiq Khan. Presenter Adil Ray, who helped organise the video, said: “After taking part in the Stay At Home campaign last year, we felt that once again we had to do something to help. Unfortunately we are now fighting another pandemic – misinformation, where communities who are ignored are preyed upon and voices that endanger lives are amplified.

“Whilst these communities must accept some responsibility too, and take the vaccine to save lives, we all must do what we can and come together to fight this deadly virus. We hope this video can help dispel some of the myths and offer some encouragement for everyone to take the vaccine.”

The news comes as the UK becomes the fifth country to pass 100,000 coronavirus deaths, after the USA, Brazil, India and Mexico.

Prof Calum Semple, a member of the Scientific Advisory Group for Emergencies, said on the BBC’s Newsnight: “It would really not surprise me if we’re looking at another 40-50,000 deaths before this burns out.

“The deaths on the way up are likely to be mirrored by the number of deaths on the way down in this wave. Each one again is a tragedy and each one represents probably four or five people who survive but are damaged by Covid.”

See also: Can I Get Life Insurance During a Pandemic?

The Labour party criticised “monumental mistakes” by the Prime Minister in delaying acting on scientific advice over lockdowns three times, while .Prof Linda Bauld, public health expert from the University of Edinburgh, said the UK’s current position was “a legacy of poor decisions that were taken when we eased restrictions”.

Eat Yourself Healthy With A Whole Day of Instant Pot® Recipes