According to Cancer Research UK, incidence rates for all cancers are projected to rise by 2 percent in the UK between 2014 and 2035. Dear Doctor focuses on the current treatments available for this growing health concern. 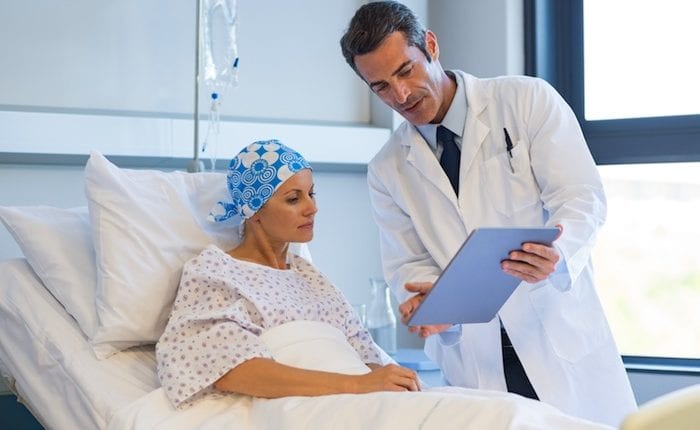 Cancer is a group of diseases that instigate abnormal cell behaviour within the body. Cancer cells divide and multiply uncontrollably, which can lead to a growth called a tumour. Common signs and symptoms of cancer include abnormal bleeding, a lump on the skin, unexplained weight loss, a persistent cough and irregularities in bowel movement. When damaging cancer cells spread to other vital organs, this is referred to as a secondary tumour or a metastasis.

Cancer is caused by damage to the DNA, which determines how cells behave. The risk of developing cancer depends on a number of factors including genes, environmental influences and lifestyle choices. Cancer Research UK reports that around four in 10 cancer cases could be prevented by making lifestyle changes such as:

While healthy living is not a cast iron guarantee for avoiding cancer, it can improve the odds dramatically.

Chemotherapy, radiation therapy and surgery are still the main treatment methods for fighting cancer. All conventional cancer treatments must go through rigorous testing to ensure that they work effectively.

Chemotherapy is a type of anti-cancer drug treatment that works systemically by circulating through the body via the bloodstream. Chemotherapy kills cancer cells that are in the process of splitting. The type or combination of drugs being administered will determine the stage at which cells are targeted and destroyed. The treatment is available via injection, drip or in capsule form. Chemotherapy has some common side effects, which can be very unpleasant for patients including weakness, hair loss, thinning skin, diarrhoea, loss of appetite and vomiting.

Radiotherapy harnesses high-energy radiation in order to target human DNA and kill cancer cells. It can be used as the sole treatment for curing cancer—curative radiotherapy—or even combined with other treatments like chemotherapy. Radiotherapy is generally considered the most effective treatment for cancer after surgery, although its efficacy can vary from person to person. Patients will frequently suffer skin reactions, swelling, hair loss and tiredness as a result of radiotherapy. Treatments in this field are constantly being fine-tuned, making them more effective than ever before. Intensity-modulated radiotherapy (IMRT) is a good example of this progression. It allows doctors to shape rays very closely around a tumour and reduce the impact of radiation on nearby healthy cells.

Surgical cancer treatment involves the removal of cancerous tissue. Patients’ suitability for surgery may depend on the type of cancer they have, the size and stage of the disease and the location of the tumour. If cancer is localised to one particular area and hasn’t spread, surgery will likely be recommended. There are some types of cancer that surgery is not suitable for such as leukemia (blood cancer) and lymphoma (cancer of the lymphatic system). If a tumour is located near a blood vessel or delicate tissue, it may be deemed too dangerous to remove.

In recent years, the oncological industry has been shaken up by the emergence of new forms of treatment. It is generally agreed that more research is needed in this area to develop these up-and-coming treatments.

Immuno-oncology is a young field on the frontier of cancer therapy that is rapidly gaining support. Unlike other treatments that directly target cancer cells, immunotherapy triggers the body’s natural immune system. It is this natural defence that attacks the dangerous cancer cells in the body. Immunotherapy can be administered via injection, drip or oral prescription. ‘Immunotherapy is going to be a critical and essential component of cancer care,’ said Dr Philip Greenberg, head of immunology at Seattle’s Fred Hutchinson Cancer Research Centre.

Virotherapy is a treatment that uses biotechnology to penetrate serious diseases. A specific virus is introduced to the system and attacks the malignant tumour cells in the body and destroys them. Virotherapy is extremely promising in its effects and is being used increasingly in hospitals. However, it does not yet have the rigorous Stage III clinical trials behind it that conventional methods do.

Proton therapy has become a hot topic within the medical community over the last few years. It is actually a type of radiotherapy. With conventional radiotherapy, high-energy beams of radiation destroy cancer cells but can also damage the surrounding tissue. This can lead to some distressing physical side effects and, in some cases, organ failure. Proton therapy uses beams of sub-atomic particles to the same cell-destroying effect. However, this form of therapy results in much less damage to the surrounding tissue. Proton therapy is painless, however, some patients have been known to suffer from fatigue and skin problems.

CAMs are very attractive to cancer patients, particularly those in the UK and US. Unfortunately, there is currently no definitive or sufficient evidence to confirm that they can cure cancer or assist in cancer treatment. In fact, CAMs have been known interact with conventional cancer treatments and reduce their efficacy. ‘There is a tendency to believe that complementary medicines are always harmless. This is not the case,’ says Robert Souhami, director of clinical and external affairs at Cancer Research UK.

These are therapies that are used alongside conventional medical treatments in order to cope with their side effects. For instance, using acupuncture to lessen the side effects of chemotherapy. Other examples include aromatherapy, vitamin supplements, visualisation and yoga.

These are treatments that are used instead of conventional medical treatments. For instance, using a special diet to treat cancer instead of anticancer drugs that are prescribed by an oncologist. Other examples include laetrile, Gerson therapy and vitamin– boosted or restricted diets.

There are over 200 different types of cancer

The number of deaths, globally, that cancer was responsible for in 2015

A study by Skyler B Johnson et al. from the Yale School of Medicine investigated cancer patients using the US National Cancer Database from 2004 to 2013. Those who chose alternative cancer therapies as their sole treatment were more than twice as likely to die compared with patients who chose conventional cancer treatments

Always inform your cancer doctor, pharmacist or specialist nurse if you are considering using an alternative or complementary therapy. They should advise you on the best form of treatment for your particular circumstance.