Vegan comfort food restaurant By CHLOE is among a slew of new meat-free eateries to hit the city. 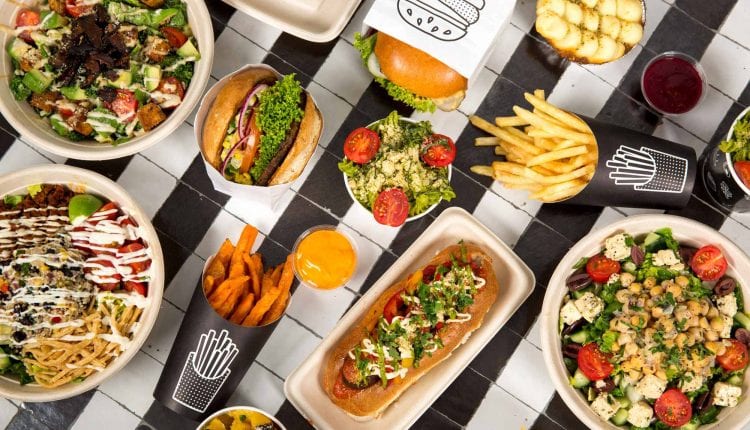 If you’re one of the few who hasn’t heard about vegan comfort food cult-favourite, By CHLOE, yet, let me paint you a picture.

Established back in 2015, By CHLOE is the brain child of co-partners Chloe Coscarelli (a vegan chef and author) and Samantha Wasser (the creative director of ESquared Hospitality). The duo’s goal is simple: to bring fresh, fast, affordable and super-tasty vegan food to the masses.

By CHLOE opened the doors of its first joint in New York City’s West Village in June 2015. It has since opened several plush vegan eateries elsewhere in New York, Boston, Providence, Los Angeles and London; boasts more than 122,000 followers on its carefully curated Instagram page; and regularly receives rave reviews in some of the world’s biggest publications.

While fans eagerly await the opening of its third restaurant in the capital, I, along with World Food Tour’s art director Friyan Mehta, see what the fuss is about at its One Tower Bridge restaurant.

Inside, the walls thrum with upbeat music and are dripping in gold, shimmering streamers, while chic wicker seats hang from the ceiling. Just above the sauce and utensils station, a very Instagrammable neon green “Romaine Calm and Carry On” (get it?!) sign is displayed, adding to an aesthetic that combines modern-day interiors with a bohemian feel. The space itself is quite small, though, which makes me wonder if customers are left waiting for seats during its busiest times.

By CHLOE’s plant-based menu is brimming with choices from its rich mac n’ cheese, created with sweet potato and cashew ‘cheese’ sauce and shiitake ‘bacon’, and a guac burger made entirely of black beans, quinoa and sweet potato, to quinoa hash browns and scrambled tofu for brunch. The cult-favourite also honours its Brit customers with their vegan take on classic dishes like ‘fish’ and chips (made with crispy tofu), the royal roast (roasted celery root) and a sticky toffee pudding served with coconut whipped cream.

First up for me is the classic burger—a dish at the helm of By CHLOE’s vegan junk food platter. Made using a balance of tempeh, lentils, chia seeds and walnuts churned with herbs, this patty has a surprising and moreish umami taste to it that smugly rivals that of a regular beef burger—seriously. Inside the potato bun (which I reckon is the softest bun I’ve ever eaten) the burger is layered with fresh, crunchy, juicy produce (read: lettuce, tomatoes, pickles and onion) and is slathered in earthy beet ketchup. The ketchup, I should add, takes a while to get used to, but it does grow on you eventually.

Friyan opts for the pesto meatball sub. These ‘Italian meatballs’ are made from Portobello mushrooms and vegetables, and are drenched in a rich marinara sauce, which, in Friyan’s words, tastes ‘just like a pizza’ (a compliment in and of itself, surely).

Our sides comprise of crispy-on-the-outside, fluffy-on-the-inside air baked sweet potato fries and tortilla chips served with a steaming pot of salty kale artichoke dip, which may sound odd, but tastes divine. If you’re craving ‘junk’ but still want to eat green, go for this; just let it cool a bit first lest you burn your taste buds off.

By CHLOE also offers an assortment of sweet treats (should you have the space) from vegan cookies and pastries to a selection of cupcakes. The chocolate with vanilla frosting cupcake, although crumbly and a little dry, is rich with chocolate flavour and the frosting is velvet-smooth. For the sweet-tooths among you, the soft, chewy cookie sandwich with a frosting filling, dipped in hundreds & thousands gets the golden star.

If By CHLOE proves anything, it’s that vegan food is not boring, nor does it compromise on flavour. It also proves that vegan comfort food, in particular, can be the moreish, filling and carb-heavy food we often crave—just without the flesh. This is one that will even surprise the most devout meat-eaters among you, too.

The Health Benefits of Escorted Travel