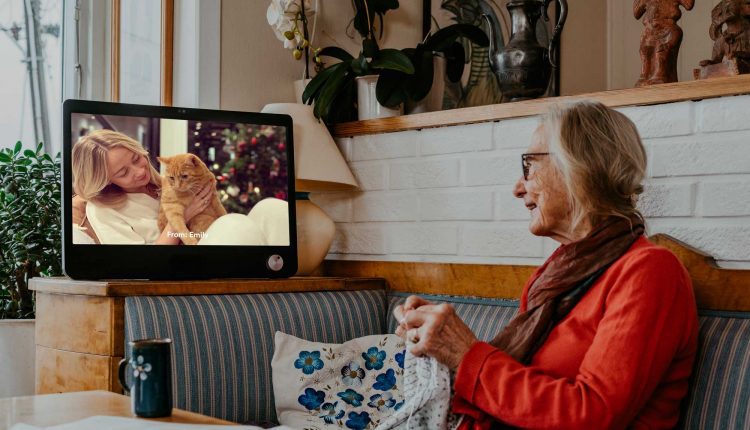 Communication is essential for health and progress, but for some it can be a challenge. No Isolation has some ingenious technological solutions for young and old.

What is the mission statement of No Isolation?

We bring people together through warm technology and knowledge.

When was it founded and what is its history?

In October 2015 we encountered a problem we couldn’t turn our backs on. We first learnt about the issue through a nurse on a children’s ward who our co-founder, Karen Dolva, had met. She talked about the children on her ward and the difficulties she encountered were meeting their social and emotional needs.

After this conversation, Karen was compelled to find out more, and came across Cornelia’s story.

At just 13 years old she had passed away following a three-year, courageous battle with cancer.

This experience was incredibly difficult for a family to go through, but what struck us was what her mother said was the hardest part of it all.

Although the operations were traumatic, and the medicines came with nasty side effects, and the sheer pain and exhaustion of the whole thing was difficult, her mother said the most difficult thing was being a 13-year old girl, cut off from your friends and all that mattered the most at that age – gossip in the playground or back of the classroom giggles.

They had tried traditional tools like Skype to stay in touch, but it didn’t suit their situation.

They often didn’t want to be seen, and they wanted the freedom to log in when they were feeling up to it.

This spurred Karen and her two other co-founders to quit their jobs, and put their UX-design and computer science backgrounds into solving this problem.

This led to the founding of No Isolation in Oslo, Norway, 2015.

What problems is Komp designed to solve?

Loneliness is something that we have all experienced at times, and we know it is an uncomfortable experience. But what is known less about is the damaging effects it can have on our physical health. In fact, research has demonstrated it is as dangerous as smoking 15 cigarettes a day. This is because being alone triggers a stress response, flooding our body with adrenaline and cortisol, which in the short term helps to trigger the fight or flight response, but in the long term, in periods of chronic loneliness, it can inhibit the healthy functioning of our organs. Loneliness can mean you are 3.4 times more likely to suffer from depression, and 2.5 times more likely to be physically inactive.

Whilst the pandemic has had many disadvantages, 2020 has also had the advantage of being the year in which 5 years of digital transformation took place. Video calls have become the norm, and are effective stand-ins for face to face interaction.

This is also the case when looking at seniors and their use of technology. Research shows that ICT communication increases the quantity of contact (internet messages are of course faster than letters) as well as the quality of contact (as opposed to a phone call) because you can see one another, read body language, leading to greater mutual understanding and connection.

However sadly not everyone can use modern communication tools.

Whilst many can learn, through brilliant digital upskilling schemes, there are many for whom a smartphone or tablet will always remain an impossibility or a frustration, and it is very important that we understand this is in no way the user’s fault.

Here is a list of reasons why modern tools just don’t work for some.

And whilst we can try to simplify or adapt existing tools, it is much easier to solve a problem when starting with a blank slate, so that you don’t miss any crucial design considerations such as leathery fingertips – the older we get the less effective our fingers are to touchscreens.

Bearing this in mind, is it really any wonder why 87% over the age of 75 are not online?

This is the problem No Isolation set out to solve when we designed Komp in 2017. Digital communication could help reduce the loneliness of millions of people, and in return save our public services huge amounts of money, if only there was the right tool to empower them to digitally connect.

One source of inspiration was a project in Ålesund kommune, where seniors living in a care facility were helped by the nurses to hold video calls using tablets with Skype. The results from this project were very promising, and both the family and seniors felt they had better contact with each other.

The relatives showed no signs of decreasing their in-person visits, and the visits were also more enjoyable for everyone, as they had more to talk about.

If we could make this possible for everyone, also for those who had no one to help them to connect to Skype, we were convinced it would help reduce loneliness amongst seniors.

A combination of looking into existing research and projects like the one mentioned above, as well as a 3-day design-sprint and a workshop with the Norwegian Cancer Society in spring 2017 together helped us define our scope.

The aim was to reduce loneliness amongst seniors, focusing on building on their close relations.

Read about how and why we made Komp here.

What are its features and functions?

Komp is a standalone device, which plugs directly into a mains socket. Komp connects to Wi-Fi, and has a built-in 4G roaming sim for users without Wi-Fi at home. Komp has USB ports at the back for various optional extra connections such as ethernet cables, or hearing aids.

Komp can be sat on a coffee table or attached to a wall mount.

Once the device is plugged in, it turns on via one button (which also controls volume). It will automatically connect to 4G or can be simply connected to Wi-Fi via the app.

The device receives video calls and other content. Pictures which are sent to the Komp appear as a carousel on the device for as long as they are scheduled and can be deleted by the app administrator.

Komp receives calls via a countdown timer (time length can be adjusted) and answers automatically, the user can reject a call by turning the device off.

Some of its most important features are in what it lacks; it has no touch-screen, which older fingertips can often struggle with, no usernames, passwords or manual updates required and no complicated user interfaces. Its simplicity is its USP.

Komp is a safe, secure and closed social network for the entire family. We don’t store any data on the Komp user, and customer data will never be shared or used for anything besides billing and support.

● Secure video streaming and data storage
● No long-term storage: Komp is made for sharing the moment. Pictures are only stored for the time chosen by you, and there is no recording feature on the video call.
● Encrypted stream: The stream is end-to-end encrypted. This means that no one other than the Komp user and the users connected to the app can access the stream.

What problem is AV1 designed to solve?

The first stage was to research the problem in more depth. This involved interviewing parents, children, teachers, doctors, charities, and more, as well as conducting desk research into the causes and effect of social isolation on young people.

What we found was shocking. Amongst other factors we learnt that social isolation could actually impact brain development, and impede physiological health due to prolonged active stress response – particularly distressing when bearing in mind the children we were focusing on were already battling serious diseases.

Aside from immediate health risks, we also learnt that these periods of isolation were having a major impact on that child’s likelihood of returning to school, attaining a good education, and thriving in adulthood.

On the positive side, we met with incredible education providers, from inspirational hospital school teachers, to dedicated home teachers, and dedicated education authority staff, but they too admitted to finding it difficult to truly bring the school arena to the child.

How does social isolation affect a child’s mental health and development?

In terms of development, the prefrontal cortex of the brain requires social interaction to develop, and physiological illness can be caused by an continuous active stress response from social isolation.

What are AV1’s features and functions?

The idea of AV1 is that it is an ‘avatar’ enabling you to be represented physically wherever you cannot go. Portable and equipped with a 4G sim card, it was designed as much for social activities as for the classroom, but special attention was given to its design with regards to school suitability based on the feedback from teachers, so it’s highly secure and GDPR compliant.

Using the AV1 app, which is linked to an AV1 robot, a child can swipe on the screen to turn the robot, and to look around. They can talk, and be heard by the class, (unless on mute), and they can express themselves with a series of lights and eye expressions.

AV1 is already used by more than 550 students across the UK, and many more across Europe.

We have gone to great lengths to make sure that AV1 is safe and secure in the classroom, for the teacher, the student using it and the students in class.

Only the child using the avatar knows the password; screenshots are forbidden, you cannot record the stream, and it is clearly visible when AV1 is active.

AV1 is a secure, end-to-end encrypted, GDPR compliant solution with a high level of privacy.

What are your key messages?

We want to empower everyone to have meaningful digital connections when their situation prevents them from connecting in person. Throughout our lives we will be presented with challenges due to illness, age, or circumstance. At No Isolation we believe that user experience design has the power to make solutions that help. Also, in this era, digital connection is a necessary right rather than a luxury. This is not about replacing human connection with digital solutions, but making sure that everyone in society can still experience the very important and vital human experience of being together with others.

Where do I find out more about No Isolation?