Uncover the secrets to cooking stunning Brazilian cuisine with this easy recipe. 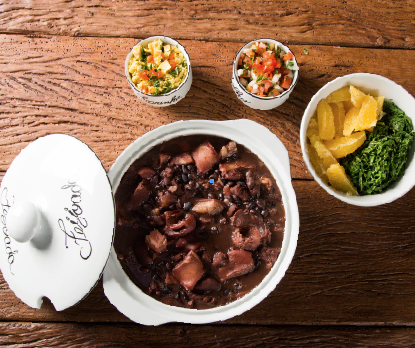 The Brazilian national football team has won the FIFA World Cup five times—the most of any team—in 1958, 1962, 1970, 1994 and 2002. If that isn’t impressive enough, Brazil is also the only team to compete in every single World Cup competition scheduled. Will they take home their sixth win this year in Russia?

Brazilian cuisine is characterised by the wide use of root vegetables such as cassava and yams and fruits such as guava, mango and acai. In addition to feijoada—a hearty stew of black beans, sausages and cuts of pork—moqueca, a fish stew; brigadeiros, chocolate truffles; and deep-fried parcels of filled pastry are all food staples.

2. Cook shallots in a pan until translucent. Add bacon and garlic and cook for 10 minutes on a low heat.

3. Remove sausages from the oven and slice into 1.5cm pieces. Add to the pan with bacon and garlic.

4. Add beans, bay leaves, the stock cube and 350ml water. Bring to a boil, then turn heat down to a simmer. Simmer for 45 minutes, stirring so that the beans don’t stick. Add more water if necessary.

5. Cook the kale in salted boiling water for 8 minutes. Slice orange into wedges to serve. Garnish with coriander and     chilli (optional).

Seeing the Same Doctor over Time: ‘a Matter of Life and Death’