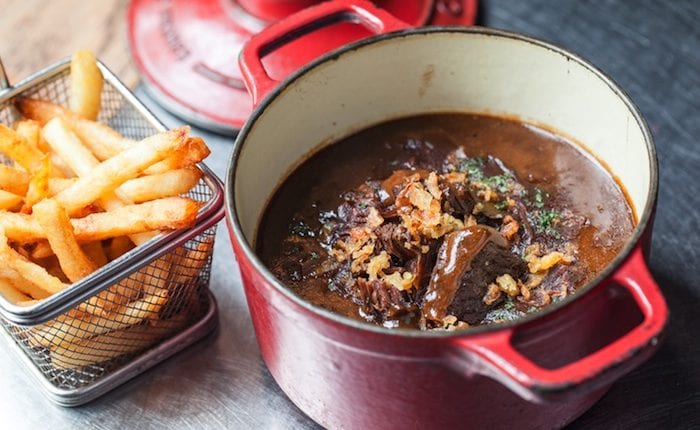 Belgium topped the FIFA World Rankings for the first time in November 2015. Famously captained by Eden Hazard—who currently plays for Chelsea in the Premier League—the team, which is also known as The Red Devils, has appeared in the end stages of 12 FIFA World Cups. They will play Panama, Tunisia and England in the group stages in a bid to finally take the title home.

In terms of food, Belgium is best known for its waffles, fries, chocolate and beer. ‘Junk food’ aside, its national dish, Carbonnade Flamande is a rich sweet-sour beef and onion stew made with beer and seasoned with thyme, bay leaves and mustard.

1. Melt the butter in a casserole dish. Season beef with salt and pepper, add 1/3 of it to the casserole. Cook over a medium heat for 3 minutes per side. Repeat with remaining meat. Set aside.

2. Add onions to the casserole. Cook for 8 minutes until browned. Stir in the flour until onions are coated. Slowly add the beer. Return the meat to the casserole with its juices. Add thyme and bay leaves, cover and simmer over a low heat, stirring regularly, for 2 hours or until the beef is tender.

3. Transfer meat to a bowl, keep simmering sauce until slightly thickened. Discard bay leaves. Return meat to casserole and season. Sprinkle with parsley and serve with boiled carrots and potatoes.