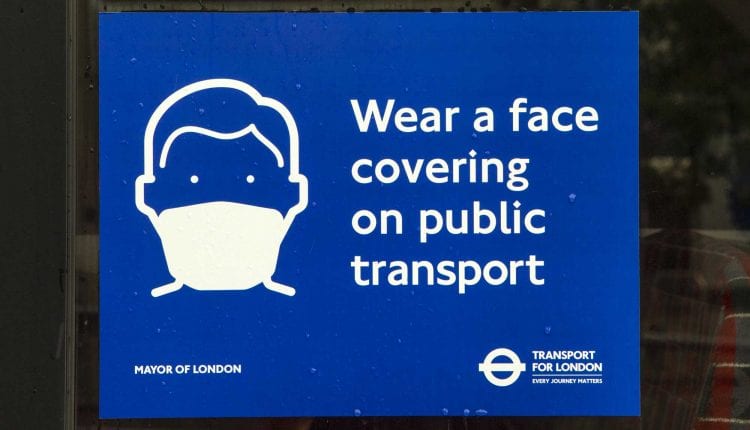 As we prepare for a lifting of most coronavirus restrictions on July 19th, there’s still widespread confusion, particularly on the question of wearing masks.

While mask wearing will no longer be a legal requirement from Monday, face coverings will continue to be compulsory in some places such as on London’s transport network, and they will remain compulsory on all public transport in Scotland and Wales. The rule will apply to Tube, bus, tram, DLR, Overground and TfL Rail.

While Transport Secretary Grant Shapps says that the rules are not confusing and “individuals will make the right judgements”, London Mayor Sadiq Khan says it would have been better for “national rules to apply across the country”, and the Rail, Maritime and Transport union says that staff could face abuse over the enforcement of “confusing” “condition of carriage” rules on face masks.

Speaking on BBC Breakfast, Grant Shapps said: “We’ve moved away from everything just being stated in law, and as we do that we expect that individuals will make the right judgements in the right circumstances and crowded environments, and that transport organisations will make it a condition of carriage where it’s appropriate.”

See also: What the Over-50s Can Do About Leg and Foot Pain

“Clearly in London, as I suggested at the time, the London Underground can be a very busy environment, particularly in rush hour, that may want to keep the requirement to wear a face covering in that situation. If you’re on a long distance train it would not make as much sense to have that organisation to require you to wear a mask.”

Sadiq Khan commented: “We know from the government’s own advisors and from the World Health Organisation, that wearing a face covering indoors does reduce transmissions. It leads to greater public safety and greater public confidence as well. As long as the virus is still with us, and as long as we’re still concerned about the virus being transmitted, we will make it compulsory.”

He said he was “confident you will see from Monday high levels of the rules being followed just like there have been since last June”.

Transport for London (TfL) has 400 enforcement officers who will deny those without a face covering from using London transport, and TfL staff and bus drivers will continue to remind passengers that masks are a requirement, said Sadiq Khan.

In Greater Manchester, Mayor Andy Burnham said he will not ‘”rule out” mandating face masks on trams, but that as he did not have authority over over forms of public transport, he was worried that without more definite government guidance, the result would be further confusion.

In Wales, First Minister Mark Drakeford said that people travelling into Wales from England will be told to wear face masks by rail companies. Face coverings continue to be mandatory on public transport and in shops in Wales, contrasting with England where people will just be advised to wear them. Mr Drakeford admitted it would be “simpler” if the same face-mask rules were applied across the whole of the UK.

The majority of restrictions in Wales are set to be scrapped from 7th August, as the nation moves into alert level zero, but face masks will still be legally required in shops and most indoor public places, meaning greater rules will exist there than over the border in England.

Worldwide, the situation is even more confusing. In Australia’s largest city Sydney, lockdown has been extended for at least another two weeks, after ‘stay-at-home’ orders in effect since late June failed to curb the city’s largest Covid outbreak this year, which has seen almost 1,000 cases.

In Scotland, Nicola Sturgeon confirmed that mask-wearing would remain in place for “some time” as she announced the move to level zero of Covid restrictions. Deputy first minister John Swinney said on BBC Scotland that it was “perfectly conceivable” that masks could still be mandatory in December.

In Spain, the third EU country to pass four million infections after France and Italy, cases began to surge again in the middle of June after a long decline, propelled by the Delta variant and more socialising among younger groups. The nationwide 14-day infection rate reached nearly 437 cases per 100,000 people on Tuesday, up from 368 cases a day earlier, health ministry data showed. Among 20 to 29-year-olds, that figure was 1,421 per 100,000.

Some hard-hit Spanish regions have introduced new rules such as night-time curfews to tackle the surge. The Catalan regional government said all activities would have to shut at 12:30 a.m. and eating or drinking in public areas would be banned. The measures are pending court approval.

In France, preparations are being made for Bastille Day with a parade in central Paris, but spectators are limited to 10,000 and will have to show proof of vaccination or a negative test, and in South Korea, social distancing rules have been tightened to combat the country’s worst outbreak yet after new daily cases rose to a high of 1,615.

Meanwhile, the Ministry of Defence has confirmed that there has been a coronavirus outbreak on the Royal Navy’s new flagship, HMS Queen Elizabeth. The BBC reports that there have been about 100 cases on the aircraft carrier, which has a crew of 3,700, is on its first operational deployment, a world tour which will cover 26,000 miles. The £3bn warship departed from Portsmouth Naval Base in May, and the Queen and the prime minister both went onboard before it headed off for the Indo-Pacific region.

Several other warships in the fleet accompanying it are also affected.

Defence Secretary Ben Wallace says that all crew on the deployment have received two doses of a Covid-19 vaccine and the outbreak is being “managed”.

See also: Creating a Happy Bedroom For Your Child