Fresh from a summer break in the City of Angels, Amanda Holden recommends her tourism hot spots 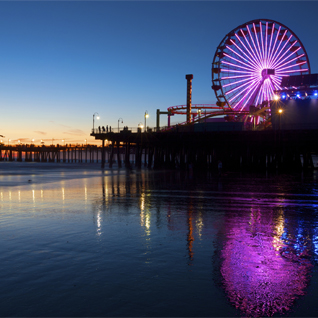 Where to eat?
BOA is great. It’s a steak restaurant and, although I’m vegetarian, they do cater for that as they do a lot of fresh fish.The atmosphere’s brilliant as it’s nice and dark. I went there with Piers [Morgan] and got hideously drunk. The family and I spent an awful lot of time in Santa Monica and we went to Il Ristorante di Giorgio Baldi, a fantastic little Italian restaurant that’s been there for 25 years. In another life I spent most summers in Tuscany, so I’m massively into Italian food, particularly peasant food.

This restaurant is unbelievable; not posh, not cheap either, but I was still salivating about the food days later. For families, we often go to Shutters. They have a happy hour between 4-7pm. It sounds and looks like a dead posh hotel, but the beach restaurant is so casual and full of children with sand everywhere. A frozen margarita and a bowl of chips and dips when you come off the beach is just gorgeous.

Where to drink?
We belong to Soho House and it is the only place to go to in LA, but not everyone belongs there so it is a bit of an elitist thing. Sunset Tower Hotel has a good bar and is good for drinks.

What to see?
The first time I ever went to LA, on my own,I went down to the [Grauman’s] Chinese Theatre and did the whole hand print thing, which you have to do. I still haven’t taken Lexi. There’s a Build-A-Bear just round the corner, so if you want to coax your children down there that should work.There are hundreds of tour vans, like the TMZ one where you can find out where celebrities live. Don’t be a snob about it because they’re brilliant fun. There’s a better one, which is the death one where you can go and see where everyone died, such as Marilyn Monroe and John Belushi.

Where to stay?
The Four Seasons is good and The Peninsula is my favourite. L’Ermitage does better rates. In America the best thing about the hotels is you can negotiate anyone down. I would always say book your flights and do your hotel yourself because on the day you can walk in and nine times out of ten you can get a brilliant rate through last minute bookings. I would never book an American hotel through anyone. We’ve picked the phone up straightaway to them and they will always work towards getting you a decent rate. I also tend to normally say,‘I’m not sure about this room, have you got any others?’ So I’ll check the next one. Nine times out of 10 the first room’s good enough, but you never know. It’s the only country, I think, that is so willing to serve you. It’s such a different attitude compared to here.

Where to shop?
Third Street is amazing because there are so many little boutique shops. No franchises, just individuals selling interesting eclectic stuff, from antique china to bits of cloth, pictures and jumble, which I love. When we’re with the girls we go to The Grove. It’s amazing for kids because they have the water display and great shops for adults. They also do kids’ entertainment and live music. My daughter Lexi is a fan of the dolls from American Girl Place, and there’s a Dylan’s Candy Bar, which is amazing. It’s like walking into Willy Wonka’s factory.