All You Need to Know About Goat’s Milk Kefir

Goat’s milk kefir is a powerful probiotic, but what’s all the fuss about? Why should we drink this ‘non-transient’ bacteria’? And how should we enjoy it? Find out in this informative Q&A. 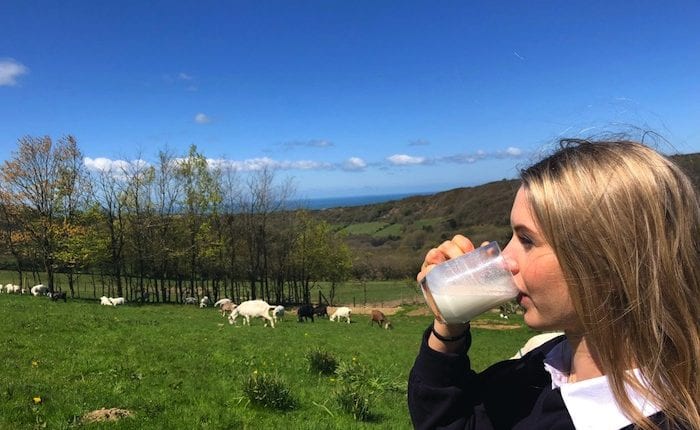 What is goat’s milk kefir?

Goat’s milk kefir is a powerful probiotic—a bit like bio-live yoghurt, but much stronger. Yoghurt has ‘transient bacteria’, which gets entirely killed off in the digestive process, which means that you’re wasting your money! Kefir, however, has ‘non-transient bacteria’ that survive the digestive process, and positively impact your gut health. The best kefir is unflavoured, made from goat’s milk (which is less allergenic than cow’s milk) and made with real kefir ‘grains,’ which are constellations of living yeasts and bacteria. Kefir is a traditional food that came out of the Black Causcasus Mountains of Russia, where the inhabitants were noted for living long and healthy lives.

Why should I be drinking it?

Kefir has been shown to boost the immune system, helping with autoimmune disorders including eczema, psoriasis, rosacea, acne, IBS, allergies, hay fever, arthritis, chronic fatigue, ME, ulcerative colitis and Crohn’s. It is also considered a ‘psychobiotic,’ meaning that it has shown positive effects on depression and anxiety. Kefir is entirely natural, and can re-populate your gut with beneficial bacteria. This reverses the damage that can be caused to your gut microbiome by antibiotics, sugar, stress and environmental toxins.

What is the science behind how it works?

Dr Michael Moseley of Trust Me I’m a Doctor performed NHS trials in January 2017, and found that traditionally made kefir was the strongest and most effective of all the probiotics available on the market today. Kefir works in three ways: One, it boosts the beneficial bacteria in your gut. Two, it suppresses pathogens in the microbiome. Three, it aids the helper T-Cells inside your system, which determine how effectively your immune system, will function.

Does it have a palatable taste?

Kefir is a bit of a ‘Marmite’ thing—some people love it, and some people don’t—but everyone has a strong opinion! The flavour tastes tart and fizzy, a bit like fizzy feta. Many people find that they dislike the sour taste to start with, but soon come to crave it as their bodies adjust and begin to anticipate the healing and energy boost it provides.

What can I do to improve the flavour?

You can blend your kefir into a delicious smoothie by adding fruits of your choice, and then sweetening to taste with 100 percent pure stevia. Bananas work well, as they are sweet and creamy. Citrus is not the best choice, as the kefir is already quite tart and acidic on its own. Any kind of berries are delicious. 100 percent pure stevia comes from a plant, and is a natural sweetener that does not harm the microbiome—the only sugar alternative recommended to add to kefir. Avoid honey, as it is a natural antibiotic that will kill off the good probioitcs in the kefir.

Does kefir improve digestion?
Yes. Probiotics such as kefir can help restore the balance of friendly bacteria in the gut, and so is established as an effective treatment for many digestive imbalances. There is a lot of evidence that probiotics and probiotic foods can help with all sorts of digestive problems, including irritable bowel syndrome (IBS), ulcers caused by H. pylori infection, diverticulitis and constipation.

Does kefir help you lose weight?
Yes, it does. The probiotics in kefir have been shown to reduce body weight and body mass index (BMI) when consumed over time. This effect was more noticeable in women than men—the probiotics actually helped the women keep the weight off. Researchers relate this effect to the fact that the intestinal flora of obese individuals differs from that of thin people. That difference may be due to the fact that a diet high in fat and low in fibre promotes certain bacteria at the expense of others.

Does it promote better bone health?
Again, yes! Kefir made from full-fat dairy is not only a great source of calcium, but also vitamin K2. This nutrient plays a central role in calcium metabolism, and supplementing with it has been shown to reduce the risk of fractures by as much as 81 percent. Recent studies have shown that kefir can increase calcium absorption by bone cells. This leads to improved bone density, which should help prevent fractures.

Are there any side effects?
Only good ones! Kefir will aid your digestion, your mood, your energy level, weight, skin and hair. However, start slowly—one tablespoon per day—and work up gradually to the recommended amount of 170ml daily. Kefir is the most powerful probiotic available on the market today, and if you’re dealing with a severe or long-standing health issue, you need to introduce the good bacteria into your system gradually, to avoid creating a detox effect.

Information about adding kefir into your own healing protocol can be found in the upcoming book by Shann Nix Jones, due out June 2018 by Hay House: The Kefir Solution: Natural Healing for IBS, Depression and Anxiety, which can be pre-ordered here: (https://www.amazon.co.uk/Kefir-Solution-Natural-Healing-Depression/dp/1788170873/ref=sr_1_1?ie=UTF8&qid=1526890989&sr=8-1&keywords=the+kefir+solution)

Loneliness, Technology and the Elderly