Aldo Zilli tells James Massoud what he enjoys most about Christmas, why he launched a range of baby food, and why Gordon Ramsay came into his cookery school in disguise 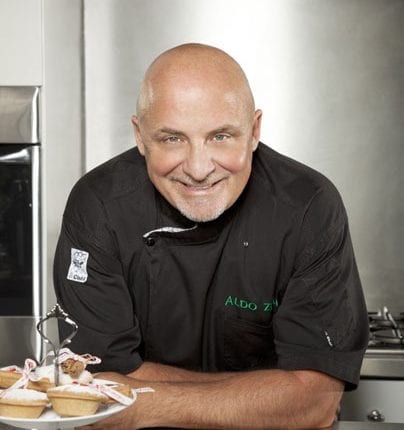 What are your plans for Christmas this year?
It’s going to be a completely different Christmas to last year because last year we had a homeless person staying in our house. We were filming Home Is Where The Heart Is so we felt like we had Christmas with “someone” last year. I’m really looking forward to this Christmas because I’ll get to be on my own with the family.

What is your ideal Christmas dinner?
My ideal Christmas dinner is late and contains lots of different foods! I don’t particularly like to have just turkey. We have fish on Christmas Eve because it’s traditional, then we go to midnight mass. The next day we get up really early because the kids are so excited. There’ll be a late breakfast, late lunch and loads of different foods, from roast beef to succulent pig, it depends on the time really.

What was Christmas like growing up one of nine children?
Christmas growing up was fantastic. Our farmhouse had everything. You can imagine growing up with seven brothers and one sister, there were children everywhere constantly and it led to lots of beautiful memories. It was nice because we didn’t even have a TV so it was very family-orientated; you had to talk to your family. Not like nowadays where all my children want to do is watch TV.

Describe your perfect Christmas Day?
My ideal Christmas Day is getting up early in the morning with the kids, opening half of the presents and saving the rest for the end of the day. My older daughter comes round and joins us then we can all spend quality time together. And eat lots of good food without having to cook!

What do you enjoy most about spending Christmas in the UK?
I really enjoy Christmas in the UK because it starts so early. I love the build-up; the radio, the TV, the ads, they all help build my kids’ excitement which is great to see. It is the same in Italy but not as big. And of course in December I like to get my children the advent calendars so they can begin the countdown.

Will you be making any New Year’s resolutions?
I think I need to go on a very strict diet! I’m launching my vegetarian book in January so I’m thinking of going 95 per cent vegetarian and just eat a little bit of fish. I’m going to give up meat next year.

What, in your opinion, is the best gift you’ve ever received and given?
As long as my older daughter and two little ones are happy that’s the best gift I can give and receive.

Upon reflection what have been your highlights of 2011?
This year made a bit of a bad start but in springtime it picked up. Despite the recession and everybody talking about it, it’s been a good year. A very good year with a very warm October!

What are your aims for 2012?
I’m hoping to get my own TV show, a cooking show, and lots more work teaching other people because I’ve got cookery schools.

What kind of TV would you like to be involved with?
I’ve actually just filmed 15 programmes in Sicily. It’s called The Sicilian Adventure and will be shown on UKTV Food. I’d love to do more travelogues.

What did you think of Seven Days, the show your daughter Laura was part of?
My opinion on that was that it was a great idea very badly executed. I think it’s now been canned and won’t be commissioned again. I think they may have chosen the wrong people for the show. As for my daughter’s involvement I didn’t mind her taking part but I don’t think she did very well on it, so I’m not very keen on her doing reality TV shows again.

What do you like most about Brighton and London?
Living in Brighton brought back memories of my childhood growing up by the sea. I really loved it. I just didn’t enjoy the travelling [to London] hence the move back. I love London; I love the parks, I cycle to work, I love the people, it’s cosmopolitan. It’s not just an English town it’s very multi-cultural. There’re loads of great restaurants too.

Having grown up in a coastal town in Italy with lots of seafood, which would you say is your favourite?
I love cooking fish and I’ve got a massive chargrill, which is perfect for barbecuing fish. Sea bass, sea bream, lobster and shellfish are all favourites.

What made you decide to launch organic baby food?
The Baby Zilli range was inspired by my kids. My team, which included dieticians and nutritionists, and I spent a couple of years researching and made sure that the eight dishes we launched were 100 per cent organic.

How did you meet your wife, Nikki?
I met my wife through friends. It was love at first sight as they say. Or love at first bite rather!

How was it becoming a Dad again when Rocco and Twiggy were born?
Becoming a father again was a challenge. It’s been a challenge ever since. Since I’ve had Rocco I haven’t had a sleep, so I’ve been awake for the last five years!

You’re in the Guinness Book of Records for flipping a pancake 117 times in one minute. Any ambitions for more records?
I’d like to swim the Thames [in the fastest time] like David Walliams did, but he wasn’t well afterwards so I don’t think he’d recommend it.

Do you remember much about your infamous three-day drinking session with Chris Evans and Paul Gascoigne?
I don’t remember much from it and there’s not really much point trying to remember it either. I do remember it being fun at the time and that’s all that mattered.

Are there any current celebrity chefs that particularly impress you?
There are so many chefs around at the moment all doing different things. I’m addicted to watching cookery programmes and [buying] cookery books; I’ve got every single cookery book at home. My inspiration comes from markets and travelling, not from other people cooking. I’ve worked with Gordon Ramsay without knowing! He came into my cookery school in disguise because he wanted to learn how to make pasta about a year ago for Channel 4.

Do you know of any up-and-coming chefs we should be keeping an eye out for?
There are always chefs being made famous nowadays with shows like MasterChef and other similar programmes. It’s a bit like The X-Factor. Even Simon Cowell’s involved now, he’s making his own cookery show.