Glaucoma is the most common cause of sight loss in working age people. What causes it, and how can it be treated? 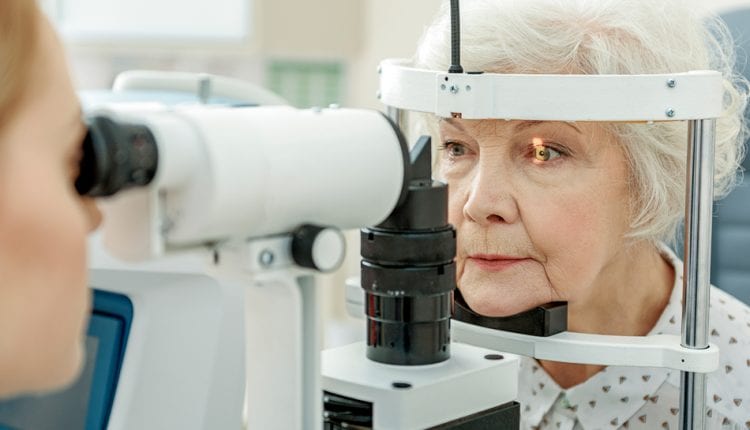 Glaucoma is a term describing a group of eye conditions that affect vision, in which the optic nerve connecting the eye to the brain becomes damaged. Glaucoma often affects both eyes, usually in varying degrees, though one eye may develop glaucoma quicker than the other.

Glaucoma can affect anyone but is most common in adults over 70. It occurs when the drainage tubes (trabecular meshwork) within the eye become slightly blocked. This prevents eye fluid (aqueous humour) from draining properly, causing a build-up of pressure. This intraocular pressure can damage the optic nerve and the nerve fibres from the retina (the light-sensitive nerve tissue that lines the back of the eye).

As glaucoma develops slowly over many years and doesn’t tend to have visible symptoms in its early stages, many people aren’t aware of it until they have a routine eye test.

But there are symptoms, such as blurred vision or seeing rainbow-coloured circles around bright lights that should prompt you to have an immediate examination.

Left untreated, glaucoma can cause serious loss of vision, including blindness, so early detection and prevention are key.

Glaucoma can be treated with eye drops, laser treatment or surgery. Early diagnosis is important because any damage to the eyes cannot be reversed—treatment can only aim to control the condition and minimise future damage.

Eye drops taken one to four times a day are the main treatment for glaucoma. There are several different types available, and some have side effects such as eye irritation, so you may have to experiment to find one that suits you.

If eye drops are ineffective you may be recommended for laser treatment under local anaesthetic. The laser will open up the drainage tubes within your eye, allowing fluid to drain out and reduce pressure.

Be Clear On Glaucoma

Surgery is a rare option where other treatments are ineffective, and can be carried out under local or general anaesthetic.

Eye Testing For Over 50s

You are entitled to a free NHS eye test if you are over 40 years old and have a first-degree relative (mother, father, sister or brother) with glaucoma, are over 60 years old, or an ophthalmologist thinks that you are at risk of developing glaucoma.

Eye tests not only detect cataracts and glaucoma, they also pick up other medical problems, such as diabetes and high blood pressure, before they become symptomatic, so if you’re eligible, take advantage of this opportunity to keep on top of your eye health. If you can’t leave your home because of illness or disability, contact your optician—sometimes they can visit you at home.

Could Private Medical Insurance Benefit You?

One Moisturiser May Not Fit All for Young Looking Skin